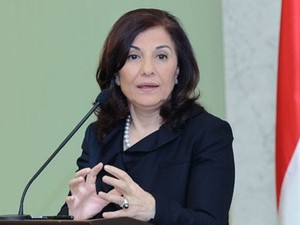 "This is a historical day that Russia and China as nations are standing for the people and against injustices," Shaaban said after the veto of the resolution, which had called for "targeted measures" against Syria if Assad's regime pursued its deadly crackdown on protests.

"I think that all the Syrians are happy that now there are other powers in the world to stand against hegemony, against military interference in the affairs of countries and people," she said.

"I feel that the veto that Russia and China have used, of course with our thanks to Russia and China, is a veto that stands with the Syrian people and gives the time for us to enforce and enhance reforms," she said.

Shaaban said the council's decision not to threaten punitive action gave space for Damascus to carry out promised reforms and "reach political pluralism without having to suffer, hopefully, from what Iraq had suffered or Libya suffers or Pakistan and Afghanistan has suffered."

"I feel that the future is Russia and China and the East," she said.

"That is the future and I am very happy with that, because we had enough of colonization from the West."

Russia had proposed an alternative resolution, which condemns the opposition violence as well as that of the government and calls for dialogue to end the crisis, although Western powers refused to back it.

"In October we intend to receive in Moscow two Syrian opposition delegations: one from the domestic wing of the opposition based in Damascus, and the second from those who declared the so-called national council," Lukashevich told journalists in televised remarks.

Although officially invited to attend a public function, they "will be received at the foreign ministry", Lukashevich said without revealing the exact date of the visit.

"Attempts to turn what happened with Security Council decisions on Libya into some kind of model for the western coalition and NATO... of reacting to crises: that is an absolutely unacceptable model for Russia," Lukashevich said.

Russia and China previously abstained on the U.N. Security Council resolution that paved the way for western intervention in Libya, but later criticized the scope of the air raids and casualties in the conflict aimed to remove Moammar Gadhafi from power.

this veto will be the direct caus to the increased violence in syria: the opposition has now one way out, armed resistance.
this veto will cause the most hideous internal war.

This is what she said

""I feel that the future is Russia and China and the East," she said.

"That is the future and I am very happy with that, because we had enough of colonization from the West."

Good luck, look at Africa with the colonization of the East and this is what you will get.

There is no need for colonization....just do it on your own...if you can

all the masks are unveilled:
- hizbushaitan is not a resistance, it is a tools for the syro/iranian goons
- our president and its government are traitors for being silent against these acts.
- Aoun and other hizbushaitan followers are traitors.
they should be judged for high traison.

She will hang along with Assad and the rest of the criminal gang.

@geha. I agree. The veto of China and Russia remove the international community from the equation of changing the Assad Regime. Now, the only avenue of change is internal. Given that the Assad Regime has responded to the domestic challenge through a violent military response, change now can only come through greater violence and a greater military response from those Syrian citizens seeking a change in the regime.

The peaceful means out of this was vetoed.

I find some of the comments posted here outright laughable if not ludicrous!!

"the peaceful means out of this was vetoed" this is just amazing! to think how much people are unaware or uneducated let alone have learnt nothing from past experiences!
What peaceful means! if it hadn't been vetoed we'll find more chaos and bombs everywhere it was already war and chaos! peaceful protesters! who are these protesters bunch of kids from poor and entirely uneducated districts of syria! given a few bucks to cause havok! tell me please what democracy and opposition are you speaking of?
Russia and china are nations with balls against a worldwide hypocracy which indirectly is holding the muzzle at their faces through Syria, I will tell you whats goin to happen Syria will come out of this twice as strong and once that is settled and done, some leaders here will be finding themselves packing their bags faster than usual before the litter hits the fan splattering itself all over their corrupt faces.

i guess area approves the murders and killings of syrian people denying them the fact to live in a democracy and not under a corrupted dictatorship, BRAVO area!
accomplice of criminals....

China and Russia's vetos are not so much an indication of supporting what the regime is currently doing – which is criminal to say the least – but rather it is a choice between the lesser of two evils. We’ve all seen what these types of security council resolutions lead to including in Iraq (under the false pretense of WMD – a lie really).

The U.S.’s campaign of shock and awe killed and injured more innocent civilians, and destroyed more of Iraq in the first few weeks of the war than Saddam or any other despot could have done throughout their entire tenure. Also, let’s not forget the nearly 1 million of innocent lives lost due to lack of food and medicine as a result of the 10 years of sanctions on Iraq prior to that war. Even today, 8 years after the war, Iraq still suffers and there seems to be no end in sight.

If history is any guide, this resolution would not have done the Syrians any favors. The 2,800 or more killed so far will pale in comparison to what would happen.

Why is it okay for Russia to meet the opposition and not OK to the Arab League to meet with them, cut the bs as it is a religious war and hunger for power.