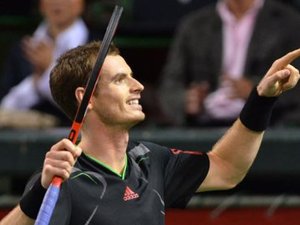 World number four Andy Murray suffered a major scare before finally beating a dogged Marcos Baghdatis to reach the second round of the Japan Open on Wednesday in Tokyo.

"That was very tough and long. I did a lot of running, especially in the first two sets," said Murray, after only his second win over Baghdatis in five meetings.

He said it was difficult to adjust after organizers were forced to close the roof on center court because of persistent rain.

"I think he played very well under the conditions. It took me a little bit longer," said Murray.

"We were playing good tennis in the third set, but in the first two sets he definitely played better than me. It's lucky that I got the first-set tie-break.

"He has a lot of talent and he has big serve."

Murray got off to a slow start, going down 0-2 in the first set before battling back to go a set ahead on the tie-break. He went down 0-4 in the second set and never recovered, as Baghdatis made it one set all.

The second-seeded Murray was again 1-3 down in the final set. But he managed to make it even at 3-3 with a break in the sixth game and went on to take a 5-4 lead as the two men held their serves.

Murray's backhand went long on his first match point and, after repeating deuces five times, Murray had another match point when Baghdatis hit a double fault.

Murray clinched his ticket to the second round when Baghdatis, a finalist in Malaysia last week, hit a backhand out.

In the second round he will take on American Alex Bogomolov Jr, who defeated Jarkko Nieminen of Finland on Tuesday.

Meanwhile, Janko Tipsarevic of Serbia, who defeated Baghdatis in the Malaysian Open final, failed to keep the momentum, losing to Dmitry Tursunov of Russia 7-6 (8/6), 6-7 (3/7), 7-5 in just over three hours.