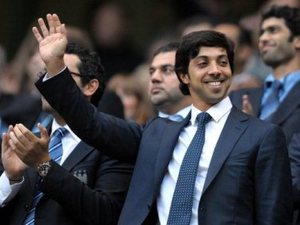 Sheikh Mansour, a member of Abu Dhabi's ruling al-Nahyan family, is believed to be worth £20 billion ($30.9 billion), putting him ahead of the likes of Chelsea owner Roman Ambramovich and Indian steel tycoon Lakshmi Mittal, who has a stake in Premier League club QPR.

He has invested over £300 million on new signings since taking over the club 2008 and has been rewarded by seeing the team qualify for this season's Champions League and win last season's FA Cup final.

Usmanov is now reported to be worth £12.4 billion, with Mittal slipping to third with a fortune of £11.8 billion.

Abramovich sits fourth on the list, with FourFourTwo reporting his fortune grew by £2.9 billion over the year to reach £10.3 billion.

Malcolm Glazer, the owner of Manchester United, has reportedly increased his fortune by £110 million to remain ninth on the list.

Liverpool owner John W Henry, whose consortium completed their buy-out of the club just over a year ago, is the highest new entry on the list, with the American going in at 20th.

Former England captain David Beckham's wealth has grown by £35 million to give him a personal fortune of £135 million according to the FourFourTwo list, making him the wealthiest player on their list and 42nd overall.