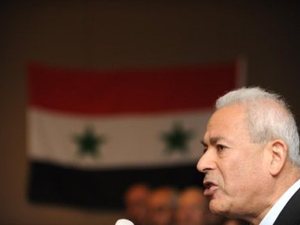 "Supporting Bashar Assad in his militarist and fascist project will not encourage the Syrian people to stick to a peaceful revolution," Burhan Ghalioun, president of the Syrian National Council (SNC), told AFP in Paris.

Asked about the decision of Russia, in particular, to block a European bid to open the way for international action against Assad, Ghalioun said: "They are truly encouraging violence."

On Tuesday, after nearly six months of negotiations, nine of 15 Security Council members voted for text, drawn up by France with Britain, Germany and Portugal, calling for "targeted measures" against Damascus.

It urged action if Assad does not halt attacks on demonstrators, which the U.N. says have left at least 2,700 dead.

As permanent members of the council, Russia and China used their veto to kill the resolution. South Africa, India, Brazil and Lebanon abstained.

"To avoid the slide towards violence, the international community needs to act differently and realise what are the risks and the dangers of this moment in history," Ghalioun said, in an interview with AFP at his home.

"I think the international community has not yet lived up to its responsibilities," the Paris-based academic said.

On Sunday, Ghalioun had met other Syrian opposition figures in Istanbul and announced that the SNC would now unite all the major known factions opposing Assad's rule, both inside and outside Syria.

no doubt about that: the people will have only the option of armed resistance.

Russia fell into a trap. Assad will be gone soon and so will Russian influence in the region. The Navy base in Tartus, arms sales to Syria, and any chance of drilling Syrian gas from the Med are all gone now.

Russia and china are now the most obstacle for democratisation process in the region. The support Assad regime in his brutality against the Syrian people.
I as an Iranian say that the most Iranian, despite of the regime not only support The Syrian people uprising but we consider that as our own fight for democracy and dignity. All of us now are in the same boat " to be or not to be"
We are going to wine! long live the Syrian People!