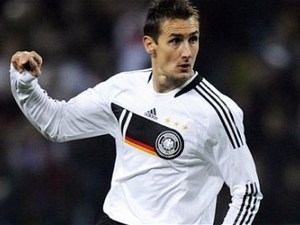 Veteran Germany striker Miroslav Klose said Wednesday he will make no decision on his international future until after the Euro 2012 finals next June for which the Germans have already qualified.

"I will not decide anything before the Euro," Klose told German daily Bild with Germany to play Turkey in Istanbul on Friday and then host Belgium in Duesseldorf next Tuesday to finish their Euro 2012 qualifier campaign.

"I am a spontaneous person, I will decide with my gut when it is time to stop.

"As long as I am having fun and remaining injury free, I want to keep playing."

Germany booked their place at Euro 2012, to be held in Poland and the Ukraine, with a 6-2 victory over Austria in Gelsenkirchen at the start of September.

Having made his debut in 2001, Klose has made 112 appearances for Germany and with 62 goals to his name, is just six short of Gerd Mueller's all-time record for the German national team of 68.

Klose says he wants to help the Germans win the next two games to finish with the perfect record of ten victories from their campaign before turning his attention to Euro 2012 next June with the final to be held in Kiev on July 1.

"For now, I just want to break the record with the national team and win all ten qualification matches," he said.

"Then I'll talk to the coach afterwards about my future."

Klose quit Bayern Munich for Rome-based Lazio during the summer and has already earned a reputation having scored several important goals for the Serie A club.

He scored an 83rd-minute winner in Lazio's 2-1 victory at Fiorentina on Sunday, having also scored a second-half winner at Cesena two weeks ago.

"I have read that my nickname is 'Goal-monster', which I found funny," grinned Klose.

"We all feel well in Rome, by that I mean myself, my wife and my children.

"It is a prerequisite for me to play well that my family are happy and at the moment I am top fit."