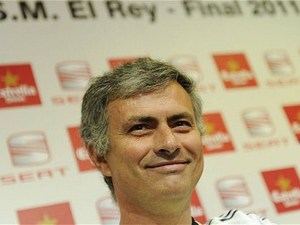 Real Madrid coach Jose Mourinho will be banned for two matches for jabbing his finger into the eye of Barcelona's assistant coach, the Spanish football federation said Wednesday.

Barcelona assistant coach Tito Vilanova was banned for one match for responding to Mourinho by slapping him during a mass brawl in the final moments of Real Madrid's Super Cup loss to Barcelona on August 17, the federation said.

The two men were also fined 600 euros ($793) each, which will have to be paid by their clubs. The two clubs were fined 90 euros each for the incident.

The bad feeling between the two clubs boiled over at the end of their match in the Nou Camp, which Barcelona won 3-2, giving them a 5-4 aggregate victory and the Super Cup trophy.

As players scrapped on the field, television pictures showed Mourinho walking over to Pep Guardiola's assistant Vilanova and poking him in the eye.

Marcelo and teammate Mesut Oezil and Barcelona striker David Villa were all subsequently shown red cards and were all handed one-game bans.

Mourinho later issued a letter apologizing for his behavior to Madrid fans but to no-one else.

"I wish to apologize to Madridistas, and only to them, for my attitude in our last game. Some people are better adapted to the hypocrisy in football than I am, and they hide their faces and speak in whispers deep inside tunnels," he said.

"I'm not learning to be a hypocrite, and I don't want to."