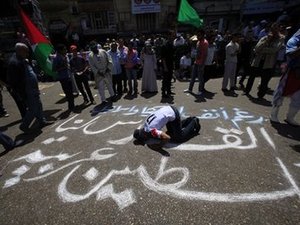 The executive committee of the United Nations cultural organization UNESCO on Wednesday recommended that the world body accept Palestine as a full member with the rights of a state.

The committee's member states voted by 40 votes in favor to four against -- with 14 abstentions -- to approve the Palestinian bid, which will now be submitted to the UNESCO general assembly at the end of the month for approval.

Palestine's candidacy was pushed by Arab member states, and if approved will represent a small diplomatic victory for a territory already seeking recognition as a full state from the United Nations Security Council.

This request, which Palestinian president Mahmoud Abbas presented to U.N. Secretary General Ban Ki-moon on September 23, is being studied by the Security Council, which is expected to vote in the coming weeks.

The United States wields a veto on the Security Council, and has said it will veto any statehood bid before Palestine comes to an agreement with US ally Israel over its longstanding territorial standoff.

But no power has a veto on the UNESCO committee, and Washington's "no" vote in Paris was not enough to derail the bid. Palestinian leaders have said they are under enormous diplomatic pressure to abandon their candidacy.

Earlier in the day France, which abstained on the motion, said "it was not the time" for Palestine to pursue UNESCO backing, calling instead for a return to talks with Israel on a final peace settlement.

But UNESCO membership would not only be a diplomatic feather in Palestine's cap -- it would allow it to apply to classify its monuments as World Heritage Sites at a time when the heritage of much of the Holy Land is under dispute.