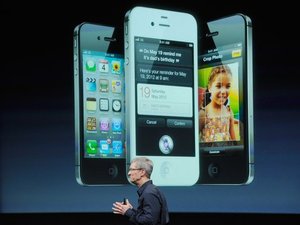 Apple shares slipped on Wall Street on Tuesday as the California gadget-maker unveiled an updated version of the iPhone but not a transformative new model many had been expecting.

The iPhone 4S features a speedier processor, a built-in "personal assistant" that responds to voice commands and a more powerful camera, but it was not the revamped next-generation iPhone 5 smartphone many Apple fans had hoped for.

Apple's stock price slid more than four percent at one point as it became clear the company was not going to wow the world with its latest product but recovered ground to end the trading day down 0.56 percent at $372.50.

"This iPhone is really not much different than the current iPhone," Kagan said, wondering whether Apple's product-launching magic departed with Jobs. "So un-Apple like."

The iPhone 4S will be available in the United States, Australia, Canada, France, Germany, Japan and Britain on October 14 with pre-orders commencing a week earlier.

The iPhone 4S will be rolled out by the end of October in 22 additional countries including Austria, Italy, Singapore, Spain, and Switzerland.

The iPhone 4S predecessor will be available for $99 while earlier generation iPhone 3GS models will be free with telecom carrier contracts, an Apple first.

A slick new version of the iOS mobile operating system was shown off at the press event in an intimate theater at Apple's Silicon Valley campus.

"IPhone 4S plus iOS 5 plus iCloud is a breakthrough combination that makes the iPhone 4S the best iPhone ever," said Apple senior vice president of worldwide marketing Philip Schiller.

"While our competitors try to imitate iPhone with a checklist of features, only iPhone can deliver these breakthrough innovations that work seamlessly together," he said.

The 4S will introduce a "Siri intelligent assistant" designed to understand context so people can speak naturally when asking it questions.

For example, spoken queries of "Will I need an umbrella this weekend?" and "What is the traffic like around here?" will prompt online searches for local weather forecasts or roadway conditions, according to Apple.

"Apple's new Siri assistant, unique to the new 4GS, is a powerful harbinger of the future use of mobile devices,' said Forrester Research analyst Charles Golvin. "Not just the power of voice but, more importantly, the ability to contextualize a statement or request."

Apple also added new features and pricing to its iPod Touch and iPod Nano devices in the latest improvements to a line kicked off with the introduction of the first iPod in the same Apple "Town Hall" in 2001.

"IPod has revolutionized the way we listen to music and with over 320 million sold is the world's most popular music player," Schiller said.

He boasted that the touch model that is essentially an iPhone without the mobile phone service was the bestselling iPod ever.

Cook appeared relaxed and confident as he filled the shoes of legendary pitchman Jobs, who underwent an operation for pancreatic cancer in 2004 and a liver transplant in 2009.

Jobs, 56, did not make an appearance at Tuesday's event. He remains with Apple as chairman of the board of directors.

For an unexplained reason, Apple's website went down briefly in the wake of the press event, for a short time displaying "Access Denied" messages to people trying to reach online pages.