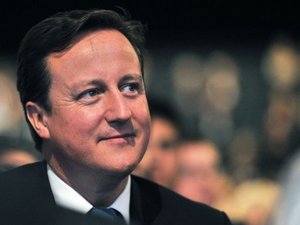 In advance extracts from his closing speech to the Conservative party's annual conference which were released by his office, Cameron was to dismiss calls to ease austerity measures and stimulate economic growth.

"The only way out of a debt crisis is to deal with your debts. That means households -- all of us -- paying off the credit card and store card bills," he was expected to say.

"It means banks getting their books in order. And it means governments all over the world cutting spending and living within their means."

Despite the crisis gripping the Eurozone and world stock markets, Cameron was also expected to call for Britons to avoid being "paralyzed by gloom and fear".

"Let's reject the pessimism. Let's bring on the can-do optimism. Let's summon the energy and appetite to fight for a better future for our country -- Great Britain," he was to say.

Since coming to power in May 2010, a coalition government led by Cameron's center-right Conservatives has taken harsh steps to deal with the record deficit of the world's sixth largest economy.

But Cameron faced more bad news on Wednesday when revised data showed the economy almost ground to a halt in the second quarter, growing by just 0.1 percent in the three months to June.

The opposition Labor party accused Cameron -- who was educated at Eton College and Oxford University -- of failing to understand the situation of ordinary people.

"I think most people will look at what David Cameron is saying today and just think he's completely out of touch," said Labor lawmaker Ian Austin, a junior minister in the last Labor government.

"He's got to understand that lots of ordinary families are really struggling at the moment with prices, VAT and unemployment going up, and they can't afford to pay off their credit cards all in one go."

If we get rid of banks, the problem will be solved. NO MORE CREDIT!