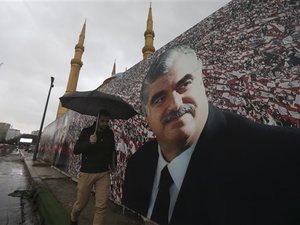 The public gallery at a court in the Netherlands was as deserted as the defendant's dock on a recent day at the trial of five Hizbullah suspects in the assassination of former Prime Minister Rafik Hariri, one of the most prominent Sunni politicians in the Middle East.

The massive explosion that tore through his convoy on the Beirut seaside 10 years ago sent a tremor across the region and unleashed a popular uprising that briefly united the Lebanese and ejected Syrian troops from the country. But a decade later, and despite millions of dollars spent, justice remains elusive in a case that has been overshadowed by more recent turmoil.

"The tribunal harks back to another era, and the latest developments have regrettably overtaken it," said Hilal Khashan, professor of political science at the American University of Beirut.

And yet despite its failings, the tribunal is still widely seen as a small but necessary step toward ending a culture of impunity in an increasingly violent region.

The February 14, 2005 assassination of Hariri, referred to by some as Lebanon's September 11, killed the former premier and 22 others, and wounded more than 200 people, stunning a nation long used to violence and political assassinations. Hariri, a charismatic billionaire businessman, was the most prominent Sunni politician in Lebanon. Although a divisive figure, he was credited with rebuilding downtown Beirut from the ravages of the 1975-1990 civil war.

Anti-Syrian groups, then in the opposition, blamed the Syrian government for Hariri's assassination, a charge denied by Damascus. Crowds of Lebanese flooded Martyrs' Square in downtown Beirut in scenes that, in retrospect, resemble the Arab Spring uprisings that broke out six years later.

Syria, which kept about 15,000 troops in Lebanon, was forced to withdraw under pressure, ending the 30-year military domination of its smaller neighbor.

But Hariri's killing and the subsequent investigation, which focused on Syria and its powerful Shiite Lebanese ally Hizbullah, sharpened the country's sectarian divisions and heightened other intractable debates, including over the role of Hizbullah and its vast arsenal, which opponents want dismantled.

The country today is beset by a militant threat to its border and frequent violence that spills over from neighboring Syria's civil war. Hariri's son, Saad, who assumed his father's political mantle, resides in Paris and Saudi Arabia, worried he would also be killed if he returned to Lebanon.

Hizbullah's leader Sayyed Hassan Nasrallah, who has cast the assassination and tribunal as an Israeli plot, has warned he would "cut off the hand" of anyone who tries to arrest the five Hizbullah suspects, saying the tribunal will never get its hands on them, not "even in 300 years."

A U.N.-backed Special Tribunal for Lebanon, set up in the Dutch town of Leidschendam, started the trial of the five suspects in absentia in January 2014. Many Lebanese politicians and witnesses have traveled to the Netherlands-based court to give their testimonies over the past year.

Marwan Hamadeh, a leading legislator and former cabinet minister who was close to Hariri, is one of them. He himself was severely wounded in an assassination attempt four months before Hariri was killed. He believes the Syrian government was behind the killing.

"We never sought revenge," he told The Associated Press in his office in downtown Beirut. "But by revealing who executed the crime, we are also gradually uncovering those who incited and took the decision for the crime," he said.

Hamadeh said he expected verdicts to be issued within a year, without the killers in the courtroom.

Banners hung along on the streets of Beirut in honor of the 10th anniversary show the late Hariri with the Arabic words: "Ten, one hundred, one thousand years: We will continue."

In the court last Wednesday, the public gallery — dozens of light gray chairs separated from the courtroom below by a wall of glass — was empty apart from one reporter and two security guards.

In the courtroom itself, just over 20 people — judges, lawyers, court staff and security guards — listened as prosecution lawyers read out brief written statements of witnesses whose identities were used to buy mobile phones allegedly used in the bombing. Once prosecutors are done laying out their evidence, lawyers for the defendants will have their turn.

Lebanese politicians allied with Hizbullah say the tribunal has no value and some have even demanded that Lebanon stop paying its share of 49 percent of the tribunal's budget, adding that oil-rich Gulf states should pay instead. The late Hariri was a dual Lebanese and Saudi citizen.

Wiam Wahhab, a politician allied with Hizbullah, said the tribunal has done "nothing that gives it credibility."

In a televised interview, he added that the tribunal "will not be able to even touch the nail of any members of the resistance," referring to Hizbullah members.

Court spokeswoman Marianne El Hajj said the tribunal is delivering justice, even without the defendants in court, and said she hopes it will have a positive impact across the Middle East and North Africa.

"The region is changing and its people are demanding justice and accountability," she said.

A Western diplomat based in the Middle East said the tribunal "is showing that there is no place for impunity, although it's hard to see anybody going to jail."

"It has a symbolic value," the diplomat said.

Why spend hundreds of millions of dollars on the STL joke if your "Syrian or Yazidi refugee" friends can crack the case so easily?
Just wondering though, do they know that Houthis are in Yemen? Maybe they need some fact-checking before posing as super detectives, unless this was just meant as a sectarian insinuation, of course.

As for Justice it will remain elusive as long as no serious effort is put into uncovering the TRUTH. 10 years after the crime all the STL showed us is false witnesses and refusal to investigate on them, refusal to investigate the israel lead, members filmed taking bribe money, dodgy rules of procedure and evidence, fancy colored cellphone networks based on potentially manipulated telecom data, and hamade placed on a tribune to peddle his stale gossip

Momo the retarded doesn't get it...the "false witnesses" were previous to the STL ... it is the STL that released them (not jailed them) ya ahbal!

As for the rest of your comments... well... you live in a nutshell my dear.. stay where you belong!

theparrot: you can shove your insults, along with this http://www.fanoos.com/special/new_tv_saad_hariri_false_witness_zouheir_siddiq.html

as i expect you to get lost, confused and in denial before reaching the second half of the article, here's a hand-picked selection for your shoving pleasure:

Still making up fictional stories anonyme? I can't believe you really believe all the stuff you make up.

So many fallacies in your comments, taking random points and filling the blanks with with your imagination. For instance regarding Wissam Eid, the STL's so-called investigation is not based on his work at all. He was conducting his own independent investigation in parallel and got killed before he could reveal his findings.
Actually, if you wonder why he was killed, consider this: if he was going to reach the same conclusion as the STL, why would anybody need to eliminate him? Eliminating him would not stop the STL from saying the same thing he was going to say.
IF however Eid was going to debunk the STL's schemes (which is possible since he may have had telecom data BEFORE they were manipulated by the israeli agents who were caught in alfa and mtc) then he would become a threat to the real killers of Hariri.

And stop equating STL with Justice, the STL is not a gift from the gods, it's a tool created by the UN, which itself is a US/israeli tool. Stop gobbling all the trash they throw your way without thinking.

hey Mowaten . i don't know what earth you live on or what orbit you floating from, and what trash you digging thru to come up with your BS and i don't care either , but everyone knows that Hezbollah Killed Hariri and for obvious reasons . and the STL is a respected world body that is sooner or later will uncover the truth and that is all we are looking for , as for justice ? it is dead in Lebanon and should RIP

lol anonyme, taking your dreams for realities. the data was proven reliable? when? where? how? dude you're so far off from reality that it's pointless to try to reason with you, you don't care about -truth-, you care about serving your hate agenda, even if that means pretending to believe BS and making some up as you go.

Neal: "everyone knows that Hezbollah Killed Hariri" > that's not called "knowing", knowing is based on facts and evidence, not rumors and baseless claims. just like anonyme the only reason why you believe is because you want to.

hahahahaha patriot, seriously? what effect did you expect your 2:53 video (of which 2:50 is stonewalling and beating around the bush) would have? what point does it make? did you even watch it yourself before posting it? do you even know what point you're trying to make? because it clearly says nothing relevant.
the only thing the awkward slow-talking snake says is "we wont investigate the false witnesses because the UN did not give us jurisdiction over it"...
WELL DUH! why the UN wont give them that jurisdiction? why would they create the STL to allegedly find out the truth about the murders, and not give any attention to those who deliberately said lies to pervert the truth?
and ps: if you think you are wasting your time than by please, by all means, save it and make something useful out of it, like getting educated.

You are absolutely right. The truth is never elusive. Everone knows who are the assassins : those who gave the orders and those who executed them. That is the truth.

Norma it is time you change careers. You are old, lame and boring with the "Houthie" crap. No one really gives a shit about Houthies except Saudi Wahhabi takfiris Monarchy terrorist sympathizers. Really! Get a life you Houthie degenerate...

STL = garbage, Lebanese tax payers paying for zionist judges. Atleast Saudi Arabia should show some sympathy and pay for it instead of the ordinary people.

Not even in the next hundred years, will the STL be able to dig out any real evidence. I feel bad for the Lebanese people, investing do much for such a

YOU PAY TAXES????? What a joke. it is not only hariri, it is all the 22 and all the assasinated. IT is not only those 5 it is also their Masters ...it is not only HizEbola, it is all the parties inCrime Like Baath, syrian Bashar. STL, is our hope of showing how bad you are.. How garbage=retards of such Iranian rev guards dogs.

How many "key people" in Syria committed "suicide" with their hands tied behind their back....eliminated to avoid reaching the head of the snake who gave the order to assassinate Hariri.

Ebola is stealing the whole country but that doesn't worry you the least...

Caporal is a traitor to the Christians. He hopes by being a servant to Ebola and Iran he will be president. But he is a loser and will never achieve anything. His mental illness will explode and he will end up in an asylum for mad people.

@humble
The Caporal was treated earlier at Deir El Salib. This is a verifiable fact

Assad needs to go= send the Mexican Drug Cartels into Syria and they will make mincemeat of that bastard along with his family. Someone needs to get rid of him/

mooowaten should go to the STL... seems he knows better than anyone else there...
he has it all figured out! waw! aren't hezbi lovers good! better than a team made of experts from various nations in the world!