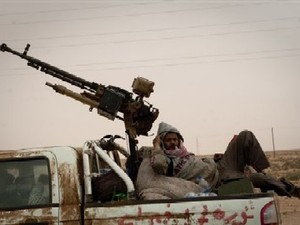 Libya's new leaders on Wednesday ordered all heavy weapons to be removed from Tripoli, warning their prolonged presence risked giving a bad image of the revolution which ousted Moammar Gadhafi.

"We call for heavy weapons to be removed from Tripoli and all the liberated towns, and for them to be gathered outside town," Ahmed Bani, spokesman for the National Transition Council's defense ministry, told a news conference.

"Some people using these arms to play around gives a negative image of the revolution and the revolutionaries," following the capture of Tripoli on August 23, he said.

But Bani insisted that despite the proliferation of arms on the streets the Gadhafi regime's weaponry had not left Libya.

NATO's chief Anders Fogh Rasmussen on Monday called on the new Libyan regime to secure stockpiles of weapons amassed by Gadhafi that could fall into the wrong hands.