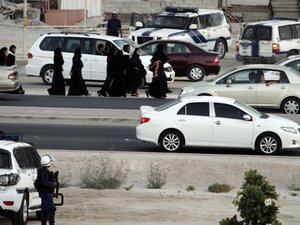 Bahrain's public prosecutor on Wednesday ordered a retrial of 20 Shiite medics jailed by a security court for up to 15 years on charges related to a month of pro-democracy protests.

"In today's decision, Dr Ali al-Boainain, attorney general, stated that the department of public prosecution has studied the judgment rendered by the national safety court on September 28 and determined that the cases should be retried in the civilian courts," a statement said.

In an apparent climb-down from the internationally criticized verdicts, the public prosecutor said the medics should not be punished for their political views and that their cases will start from scratch.

"No doctors or other medical personnel may be punished by reason of the fulfillment of their humanitarian duties or their political views," he said in the statement.

The medics all worked at the Salmaniya Medical Complex in Manama, which was stormed by security forces in March after they drove protesters out of the nearby Pearl Square -- the focal point of protests inspired by uprisings that have swept the Arab world.

They included 13 doctors, one dentist, nurses and paramedics.

They were also convicted of "inciting hatred for the regime and insulting it, instigating hatred against another sect and obstructing the implementation of law, destroying public property and taking part in gatherings aimed at jeopardizing the general security and committing crimes," BNA said.

"All these acts were done with a terrorist aim," it added.

The medics had been assigned a date to look into their appeal by a civil court on October 23.

But in the Thursday decision, the public prosecutor said "the accused will have the benefit of full re-evaluation of evidence and full opportunity to present their defenses."

"The retrial will be conducted before the highest civil court in Bahrain... The department of public prosecution seeks to establish the truth and to enforce the law, while protecting the rights of the accused," Boainain was quoted as saying in the official statement.

He said that the medics will remain out of custody "pending the outcome of the retrials."

The 20 medics received jail terms ranging from five to 15 years.

King Hamad had promised that trials conducted by the national safety court, set up in the wake of the March crackdown on pro-democracy protests led by the Shiite majority against the Sunni ruling family, will have their verdicts issued by civil courts.

The pledge was seen as aimed at diffusing persistent tensions which have rocked the Gulf state's economy.

Authorities gave said 24 people, including four policemen, were killed in the unrest. The opposition puts the death toll at 30.