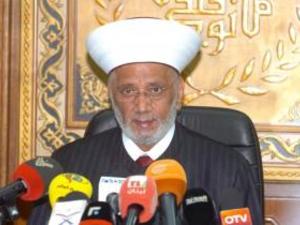 Grand Mufti Sheikh Abdul Latif Daryan visited on Friday the grave of ex-PM Rafik Hariri in downtown Beirut from where he urged the Lebanese to hold onto the state and coexistence.

The 10th anniversary of Hariri's assassination comes in the absence of a president, Daryan said in a statement he read to reporters near al-Amin Mosque.

Parliament's tenure was extended twice and there are security issues as a result of the civil war raging in Syria, he said.

“But we should not despair and should hold onto the state, the nation and coexistence,” he added.

Daryan praised Hariri for working for more than 20 years to build a better future.

“Hariri focused on education and reconstruction and worked to improve the functioning of state institutions,” he said.

The former premier “made large steps that were welcomed by the majority of the Lebanese,” Daryan added.

His son, al-Mustaqbal movement leader former Prime Minister Saad Hariri, is expected to deliver a long speech during a rally commemorating his slain father on Saturday.

There are conflicting reports on whether he would attend the rally or address it via video link.

Hariri the father was assassinated 10 years ago in a massive explosion that tore through his convoy on the Beirut seaside.

Five Hizbullah suspects are being tried in absentia by the Special Tribunal for Lebanon based in The Hague.

Ebola is aiming at taking everything or creating a Southern Governorate. in the North Kurdistan and Alawistan. In the middle a tiny Marounistan. In South and Bekaa Shiistan. In South East a Druzistan. All to be in best alliance with Jewishstan.
For the moment all appear to hate Israel, but that is not the reality. Kurdistan, Alawistan and Druzistan are already working hand in hand with Israel.
The others are using Taqqiya...

The Governorate of Nabatiyeh will be linked to Iran through Kuneitra region and Iraq. All future wars will not be against zionists but between Shiistan (Persian empire) and Arabistan, Which will be surrounded from all sides by Shiistan.
Both Shiistan and Arabistan are trying to win the zionists on their side.

Coexistence? My foot. It is terminated. Very unfortunately.
Either an Islamic Republic or partition. Disgusting Iranian plans.