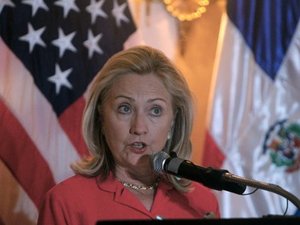 U.S. Secretary of State Hillary Clinton on Wednesday slammed Russia and China for vetoing a U.N. Security Council resolution on Syria, saying the people of Syria "will not forget."

Clinton said the Council had "abrogated its responsibility" by failing to push through the European draft resolution that would have threatened possible action against Syrian President Bashar Assad over a crackdown on protests.

"We believe the Security Council abrogated its responsibility yesterday. The countries that chose to veto the resolution will have to offer their own explanations to the Syrian people," Clinton told a press conference.

"The Syrian people will not forget," said Clinton, who was in the Dominican Republic for a ministerial forum on Latin America.

Russia and China used their veto as permanent members of the Security Council, rejecting any hint of sanctions against Syria. Brazil, India, Lebanon and South Africa abstained.

According to the U.N., more than 2,700 people have died in the crackdown on protests in Syria over the past seven months.

The U.N. Security Council meeting ended in acrimony on Tuesday, with U.S. ambassador Susan Rice leading her delegation out after Syria's ambassador said the United States was linked to "genocide."

"The United States and our European allies, we have made very clear where we stand on this issue," she told reporters.

"In the meantime, those countries that continue to send weapons to the Assad regime have to look hard at what they are doing. They are protecting the wrong side in this dispute."

reply to LEBLOVER, the american were standing right next to the Syrian and Bashar when Israel was bombing lebanon.. ask yourself this question. when Assad fired one bullet on the Israeli? never ever Assad was the protector of Israel.

Actually, Mrs. Clinton is better looking than Nassrallah. I think she is cute and comforting to the eye compared to eye sore that is Nassrallah.

After defeated in the UN Security Council, Mrs Clinton turned to the literature.

After defeated in the UN Security Council, Mrs Clinton turned to the literature.