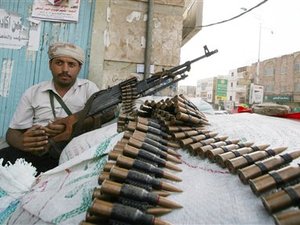 The two sides traded machinegun and mortar fire for around two hours late on Wednesday, the witnesses said.

They said the exchanges were being directed from the tribal chief's home on the one side and the nearby ministry of the interior on the other.

No casualties were immediately reported.

The two sides first clashed in May, after Saleh refused to sign a Gulf-brokered plan under which he would step down in return for immunity from prosecution for himself and his family.

Those clashes, that left 300 people dead, came to a halt when Saleh was wounded in a bomb attack on his palace on June 3 after which he was flown to Riyadh for treatment.

In September, fighting between rival army units spread across the capital prompting renewed battles between the tribesmen and government forces in al-Hasaba.

The situation calmed again when Saleh, still refusing to let go of power he has been holding to since 1978, returned to Yemen on September 23.

The 69-year-old president is under growing domestic and international pressures to step down, as anti-regime protests in Yemen entered their 10th month.