Ban on Hariri Anniversary: Impunity Will Not Be Tolerated 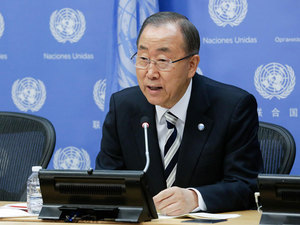 U.N. Secretary-General Ban Ki-moon on Saturday stressed that “impunity will not be tolerated” in the case of the 2005 assassination of former premier Rafik Hariri.

“On the tenth anniversary of the assassination of former Lebanese Prime Minister Rafik Hariri and 21 others who lost their lives on that day, the Secretary-General renews his condolences to the families of the victims of this terrorist attack,” Ban's spokesman said.

“A decade on, the message remains that impunity will not be tolerated,” he added.

Ban underlined that the United Nations is committed to support the work of the U.N.-backed Special Tribunal for Lebanon, which is probing the murder, “with the continued support and cooperation of the Government of Lebanon.”

“The United Nations reiterates its long standing commitment to the people of Lebanon on this occasion,” Ban's spokesman added.

“As Lebanon faces renewed challenges, the United Nations continues to work with the Government of Lebanon, alongside all Lebanese partners, to support the country in its efforts to strengthen stability and security, in line with relevant resolutions of the Security Council,” he said.

Rafik Hariri was assassinated in a massive bombing that targeted his convoy in central Beirut on February 14, 2005. The attack killed 21 other people and wounded nearly 300.

The STL is trying five Hizbullah members in absentia over their alleged involvement in the murder.

Mr Ban Ki-Moon, can we name who is in total IMPUNITY?
Ebola is.