NATO Allies Debate when to End to Libya Air War 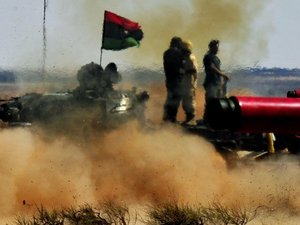 NATO allies debated on Thursday how quickly to end the bombing campaign in Libya as they reviewed progress in their plans to withdraw combat troops from the 10-year-old war in Afghanistan.

With Moammar Gadhafi diehards surrounded by the new leadership's forces in Sirte and Bani Walid, and the fallen Libyan leader in hiding, the number of NATO air strikes has drastically declined in recent weeks.

NATO officials say the six-month-old air war will continue as long as Gadhafi loyalists pose a threat to civilians.

"Sirte is extremely symbolic. But it is important that we no longer have pockets of resistance," said French Defense Minister Gerard Longuet.

"Whether Gadhafi disappears from the scene is important, but it's not enough," Longuet told reporters before a second day of talks with NATO counterparts.

Once the country is deemed secure, Stavridis suggested that the no-fly zone carry on for two weeks until NATO is "sure that fighting has ended," the diplomat told Agence France Presse on condition of anonymity.

Gadhafi loyalists have made it tricky for NATO warplanes to bomb them by hiding in built-up areas, using civilians as human shields to deter air strikes, officials said.

NATO reported eight air strikes in Bani Walid, a southern desert town, on Wednesday but no bombings in Gadhafi's hometown of Sirte in the east, compared to between 15 and 20 raids daily across Libya earlier in the mission.

The campaign began in March when Gadhafi troops had rebels on the back foot. NATO's strikes helped tip the balance in favor of a loose coalition of opponents who in August overran the capital Tripoli , winning international recognition.

NATO Secretary General Anders Fogh Rasmussen said the decision to halt the operation would hinge on the ability of National Transitional Council (NTC) forces to maintain order -- not on the fate of Gadhafi.

"The termination of the operation is not dependent on Colonel Gadhafi," he told reporters on Wednesday.

Officials said the alliance had to make a political judgment, balancing the need to prevent attacks on civilians while avoiding the impression of meddling.

"It will be a political decision, which will involve the U.N. and the NTC and it will be a question of an international concert of opinion that the time has come," said a senior NATO official.

"The big risk is that one day we stop and the next day there is a massacre, in which case we would have failed."

Senior military officers overseeing the operation from Naples, Italy, were increasingly eager to call an end to the effort given the retreat of Gadhafi's troops, officials said.

But alliance members are waiting for a clear conclusion to fighting in Sirte and Bani Walid, where NTC troops are trying to finish off Gadhafi loyalists.

Success in Afghanistan, a war marking its 10th anniversary on Friday, also depends on the ability of local forces to ensure security for the population.

NATO is gradually handing control of the battlefield to Afghan forces, with the goal of withdrawing foreign combat troops from the country by 2014. Some 140,000 NATO soldiers are in Afghanistan, including 100,000 Americans.

Efforts to find a peaceful end to the war with the Taliban were dealt a major blow last month when former president Burhanuddin Rabbani, the government's peace envoy, was killed by a suicide bomber.

"Transition is on track and it will not be derailed," Rasmussen said. "To those who only offer death and destruction to the Afghan people, we say, 'you will not triumph'."