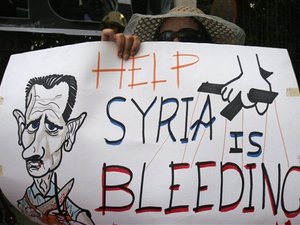 Four Syrian soldiers were killed and several civilians wounded on Thursday during clashes between troops and deserters in a town in northwest Syria, rights activists said.

The Britain-based Syrian Observatory for Human Rights said troops and security agents had attacked villages in the region,

"Four soldiers were killed and a number of civilians killed or wounded in fighting this morning between the Syrian army and deserters in Jabal al-Zawiya" in Idlib province near the Turkish border, it said.

Security forces have been trying for months to bring an end to a popular uprising which has seen hundreds of thousands marching in major cities against the regime of President Bashar Assad.

The United Nations estimates that in the crackdown more than 2,700 people have been killed since mid-March.

Syria maintains that the regime's opponents are armed gangs and terrorists trying to sow chaos in the country.

A resolution put to the Security Council was vetoed this week by Russia and China, a move denounced by several western countries, including the United States.