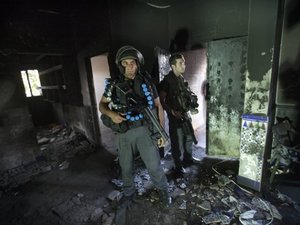 Israeli police arrested seven more people suspected of joining rock-throwing protests in a Bedouin village in northern Israel following an arson attack on a mosque there, a spokesman said Thursday.

"We arrested another seven people suspected of taking part in the demonstrations, which raises to 25 the total number of people being investigated over the incidents," police spokesman Micky Rosenfeld told Agence France Presse.

Angry Bedouin youths have been demonstrating throughout the week since a mosque in Tuba Zangariya village was torched by vandals early on Monday, throwing stones and clashing with police who were sent in to restore order.

The attack, which sparked a wave of international condemnation, is believed to be the work of Jewish extremists.

But a court in Nazareth slapped a gag order on details of the investigation which is being conducted by the Shin Bet internal security agency.

The mosque was badly damaged by fire with the perpetrators scrawling the words "tag" and "revenge" on the walls, in what police described as "a very severe price tag incident" -- a term which usually refers to acts of vengeance against Palestinians and their property by Jewish settlers in the West Bank.

Although such acts normally occur in the West Bank, a similar attack targeted another mosque in Ibtin village in Galilee last year.

The desecration of the mosque was condemned by top Israeli political and religious figures and also sparked angry protests among village residents, who clashed with police.

Tuba Zangaria is located just seven kilometers from the northern town of Safed where a local rabbi last year sparked outrage after calling on Jews to avoid renting or selling property to Arabs.

Where are the Israeli appologists? what no comments?

So Israel is instrumental in arresting anyone and everyone that is even mildly related to protesting the descration of a place of worship - as long as they are Arabs of course. But no arrests of any settlers are made and there are no suspects at all... Hmmmm very odd way to investigate or deal with such a crime...

Yep definitely the beacon of freedom and democracy in the region...

To: Pong Lenis: Don't let the facts spoil your nice story.
But let me correct you: Besides that all Israeli government condemned this fanatic action. President Shimon Peres has visited the mosque same morning. The government immediately opened an account for repair the damage. One suspect already arrested and 2 of his colleagues being chased by the police. Didn't notice any reaction from your side when Hamas in Gaza strip set fire on Israeli holy places left behind, Didn't hear the Muslim world condemning the Taliban's blowing up the ancient Budhaa statues.
And speaking of respecting other religions. let me ask you, how many churches you may find in KSA?