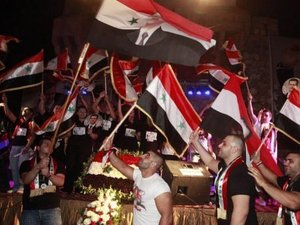 Germany has summoned the Syrian ambassador to Berlin over a tirade by Damascus's envoy to the United Nations, the foreign ministry said in a statement here Thursday.

"The Syrian ambassador in Germany was summoned yesterday to the foreign ministry," the statement said.

"At the meeting, the verbal attack by the Syrian U.N. ambassador was rejected in the strongest terms," it added.

"The Syrian U.N. ambassador made absolutely unacceptable remarks about Germany after talks at the U.N. Security Council on the Syria resolution."

Jaafari said those seeking action against Syria were "our enemies" and had no "humanitarian motive".

The meeting ended in acrimony with U.S. ambassador to the U.N. Susan Rice leading her delegation out after Jaafari said the United States was linked to "genocide".

And German daily Bild reported Tuesday that Jaafari had also singled out Berlin for a bitter rebuke.

"Germany, which persecuted the Jews in Europe, is trying to play the honest broker for a mendacious and fraudulent resolution," he was quoted as saying.

The foreign ministry said the Syrian ambassador to Germany had also been told that "spying on and intimidating Syrian opposition members in Germany is in no way acceptable."

Amnesty International said this week it had documented cases of attacks and intimidation against 30 Syrian activists in eight countries: Britain, Canada, Chile, France, Germany, Spain, Sweden and the United States.

A foreign ministry spokeswoman could not provide further details on cases in Germany.

Kick that Bastard out!! and Kick the Jaafari baboon out of the UN, why is the free world still dealing with the Criminal Assad Regime's goons still, the Assad criminal has never had any legitmicay (it came with a coup) and it has consolidated its illegitimate status for forty years of bloody murder and assassination against the free people in Syria, Lebanon and the entire ME.while holding the whole of the ME Security Hostage with Iran. It's about time it is treated like the criminal Dictatorship it is TOTAL isolation and has to face force of action, and throw out these so called "ambassadors" of Assad (who are in fact nothing but the extension of his stalinist criminal secret thug service to persecute free Syrians abroad). I think all of the free world should immediately ask Assad's illegitmate criminal dictatorshup regime's representatives to leave the free world's countries with immediate effect for the next phase that will follow...

Russia and China are going to lose on this one in the region. Syria can push its people around, but it can't use the same tactics on powerful countries. ASSad will pay for his outbursts geopolitically.

Germany's idea of a Christian heritage is to persecute Arabs in order to atone for persecuting Jews. Its idea of law is to refuse to discuss the matter further