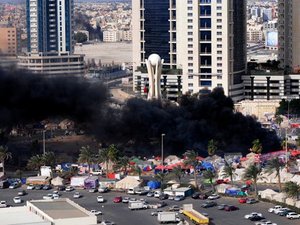 "The intensification of the crackdown on protesters and the heavy sentences will lead nowhere. Bahrain's government should take appropriate measures to respond to the demands and wishes of its people," Salehi said in remarks on Wednesday, Iran's state television reported on its website.

Scores of opposition activists and protesters in Bahrain have been given stiff punishment, including several death sentences, on charges related to a month of pro-democracy protests.

The sentences have been criticized as harsh by Human Rights Watch, the United Nations, the United States and many other Western countries.

Among those convicted are 20 Shiite medics of Manama's largest hospital, the Salmaniya Medical Complex. They were found guilty of "incitement to overthrow the regime."

Some of the others sentenced, including women, were found guilty of "calling for the overthrow of the political system using force and illegal means," according to Bahrain's official BNA news agency.

The protests against the Sunni dynasty of al-Khalifa, launched in February by the Shiite majority in the country, were violently suppressed and left 30 dead.

Iran, which is also predominantly Shiite, vocally supported the uprising in the tiny Gulf Island and strongly criticized the crackdown. Bahrain in return accused Iran of meddling and fanning sectarian unrest.

Iran also slammed the military intervention by Saudi Arabia and some other Gulf countries in Bahrain to help the crackdown on the protesters.

or like the measures the syrians are taking?
it seems the syro/iranian understands heavy violent retaliation to be the correct course of action.

Why is Iran even voicing an opinion on what is happening in Bahrain? Is it coz it cares so much about democracy and human rights, or is it coz those rioting are Shiites? There is no doubt the uprising in Bahrain is solely inspired, driven, and orchestrated by those retarded rulers in Iran. We don't see any voices here barking against the unlawful occupation by Iran of the 3 islands off the coast of the UAE? Resisting occupation has become selective.... If Shiite Iran occupies Sunni UAE land then it is ok.....! Resistance my backside.....

Iran's government was approved by the majority, according to the social science researchers, which is more than we can say about the government of Lebanon, which makes it like Bahrain, including having the majority which is excluded from power "by law" being Shiites.