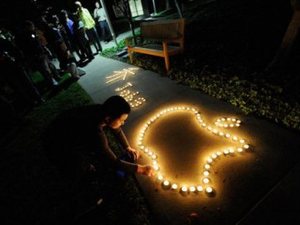 Seven-time Tour de France cycling champion Lance Armstrong was among those in the sporting world who took to Twitter to mourn the death of visionary Apple co-founder Steve Jobs.

"Devastated 2 hear about the passing of Steve Jobs," Armstrong tweeted. "Was blessed 2 have the opportunity to spend time w/ him on several occasions. May he RIP."

Armstrong also offered a favorite remark by Jobs, who revolutionized modern culture and changed forever the world's relationship to technology through inventions such as the iPad and iPhone.

"'A computer is the most remarkable tool that we've ever come up with. It's a bicycle for our minds' - Steve Jobs," Armstrong posted.

Jobs died of cancer Wednesday at the age of 56.

"Someone who definitely left his mark on this world!" NBA superstar LeBron James tweeted. "Innovations that will live and last forever!!"