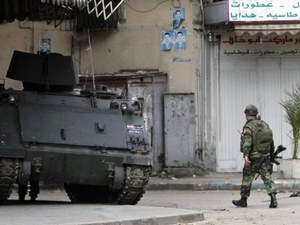 The Qaida-linked Abdullah Azzam Brigades warned the Lebanese security agencies from continuing their war against Sunnis in Lebanon and detaining their youth, considering the apparatuses a direct enemy.

“Any Lebanese security agency that participates in oppressing the Sunnis in Lebanon and Syria will be our direct enemy,” the brigades said in a statement under the title “a message to the Lebanese people, government and army - 2.”

The statement called on the Sunni soldiers to defect the army and join the ranks of the jihadists, warning them that attacks against the military would target them if they didn't.

The brigades also lashed out at Hizbullah chief Sayyed Hassan Nasrallah, describing him as the “actual governor in Lebanon.”

The statement pointed out that Nasrallah “is not concerned with the battle against Israel and claims that the jihadists entrenched along the Syrian-Palestinian border are Jewish agents, while Hizbullah is a loyal guardian for the Zionists.”

Hizbullah has dispatched fighters to battle alongside the Syrian regime against rebels seeking the overthrow of President Bashar Assad.

The conflict, pitting a Sunni-dominated rebel movement against Assad, has raised sectarian tensions in Lebanon and Lebanese Sunni fighters have also been killed while fighting alongside Syrian rebels.

The brigades also accused Hizbullah of all assassinations in Lebanon since 2005, calling on it to hand over the five suspects to the Special Tribunal for Lebanon.

After the murder of ex-Prime Minister Rafik Hariri in 2005, assassinations increased in Lebanon with several March 14 figures being targeted.

Five Hizbullah suspects are being tried in absentia by the STL based in The Hague.

I wonder how you are and how you and your 50 new aliases are managing to post dear flamethrower..... RIP Shia Hero

These Azzam brigades use the exact same language as M14. Coincidence?

The statement pointed out that Nasrallah “is not concerned with the battle against Israel and claims that the jihadists entrenched along the Syrian-Palestinian border are Jewish agents, while Hizbullah is a loyal guardian for the Zionists.”

- the loyal guardian for the Zionists lol haven't I been saying that for a while...