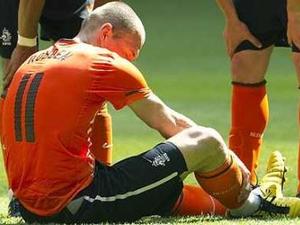 Netherlands winger Arjen Robben's injury curse has struck again after the Dutch Football Federation (KNVB) announced on Thursday that he had been ruled out of their forthcoming Euro 2012 qualifiers.

Robben had been named in the squad to play Moldova on Friday and Sweden next Tuesday but will now return to his club Bayern Munich to undergo further tests on a troublesome groin injury.

"I'm worried," he told Dutch news agency ANP. "I don't know whether I am with this injury and it's really frustrating.

"It's a complicated injury. No-one can tell me exactly what I need to do."

Robben has already missed several matches for Bayern this season due to a succession of injuries, including his current groin problem.

Netherlands coach Bert van Marwijk said he would not call up a replacement, despite also being without Maarten Stekelenburg, Wesley Sneijder, John Heitinga, Hedwiges Maduro and Ibrahim Afellay due to injury.

The Netherlands' two final matches are of little consequence as van Marwijk's side have already qualified for next year's tournament in Poland and Ukraine, along with Germany, Spain, Italy and the two co-hosts.