12 Dead in Army, Deserters Clash in Idlib as U.N. Says More than 2,900 Killed since March 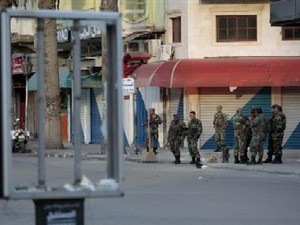 Twelve people were killed in clashes between soldiers and deserters in villages of Idlib province in northwest Syria on Thursday, a human rights group said.

"Seven soldiers and five deserters were killed in the clashes in villages west of Jabal al-Zawiya," the Syrian Observatory for Human Rights said, adding that dozens were wounded.

Meanwhile, the U.N. High Commissioner for Human Rights said Thursday that more than 2,900 people have been killed in the six months since the beginning of a crackdown on anti-government protests in Syria.

"According to the detailed list of names of individuals we've been keeping, the total number of people killed since protests began in Syria now stands at more than 2,900," Commission spokesman Rupert Colville told AFP in Geneva.

Colville said that figure could rise because "quite a lot more people" have been reported missing in Syria since the uprising against President Bashar Assad's government in mid-March, and the U.N. has yet to verify their whereabouts.

Meanwhile, the official Syrian new agency SANA reported on Wednesday that the “competent authorities” in al-Khaldiyeh neighborhood in Homs seized a white Kia Rio Car with the license plate No. 418869.

“The authorities arrested three armed terrorist members and discovered a place for kidnapping innocent individuals and torturing them in the same area,” it added.

the zionist information war department is hoping that their plan is working.

The army is breaking into pieces ya Bashar.. Soon so will your government.

strange how ahbal is defending a country supported by israel.... and he accuses the others of being sionists....

In this day and age there is no place for countries with totalitarian regimes. This being said, the only solution to the Syrian current crisis is a genuine and sincere dialogue that would lead to establishing a democratic state in Syria which will help us in lebanon as well since we are as well tilting towards creating a totalitarian regime without even knowing about it. What amazes me is the fact that Lebanon should have exported his semi democratic ideas to the Arab world; instead, we imported their totalitarian regime ideas into our country. Shame on us. iuntil when are we going to fool ourselves. All countries, including the prior soviet union states, have integrated within Europe to create democracies while us who had a semi democracy are going backwards to creating a one man show country. poeple go forward to prsper while we go backwards to poverity. It's time we do something. I am not really hopeful in the lebanese's abilities because those who could have absconded.