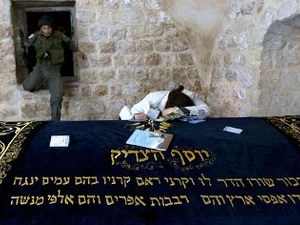 Vandals daubed swastikas on the exterior walls of Joseph's tomb in the West Bank city Nablus, a spokesman for the Israeli army said on Thursday.

"This morning, soldiers discovered swastikas painted on the walls of the building that contains the tomb. The soldiers cleaned the premises and a complaint was sent to the Palestinian Authority," the spokesman told AFP.

The soldiers were at the site preparing it for pilgrimage of 1,500 Jewish worshippers who are due to visit the holy site overnight.

Danny Dayan, chairman of the Yesha Council which represents West Bank settlers, denounced the move as "shocking" especially as it came just days before Yom Kippur, the holiest day of the Jewish calendar which starts at sundown on Friday.

Israel's two chief rabbis also decried the "malicious attack," and called on leaders of all religious to condemn the act.

The incident comes just three days after vandals torched a mosque in a Bedouin town in northern Israel, in an attack blamed on Jewish extremists.

The tomb is a place of pilgrimage for religious Jews, who believe it to be the final resting place of the biblical figure Joseph. Muslims believe that an Islamic cleric, Sheikh Youssef (Joseph) Dawiqat, was buried there two centuries ago.

Under the 1993 Oslo Accords, the site was to remain under Israeli control. But the Israeli army evacuated the premises in October 2000 shortly after the start of the second intifada, or uprising, and it was immediately destroyed and burnt by the Palestinians.

The restoration of the tomb was completed recently, and following improved security cooperation with the Palestinian Authority, the army allows Jewish worshippers to make monthly nocturnal pilgrimages to the site.