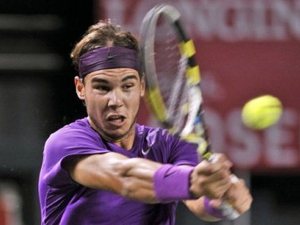 Defending champion and top seed Rafael Nadal survived an early scare as he and second seed Andy Murray rolled into the quarter-finals of the Japan Open on Thursday in Tokyo.

David Ferrer, the third seed from Spain, also advanced, but not before dropping a set to Australia's spirited qualifier Matthew Ebden.

Nadal, who was playing his first singles tournament since losing the US Open final last month, admitted the big-serving Milos Raonic had caused him some headaches in the 7-5, 6-3 victory.

The Canadian, 20, forced down eight aces to leave Nadal stumped early on.

"At the beginning of the set I didn't have one chance to return his serve. I lost the first two games on his serve without winning one point," said Nadal, 25.

"But I felt I started to return his serve more, so I felt I was closer to break than at the beginning."

In the quarter-finals on Friday, Nadal will take on Santiago Giraldo of Colombia, winner over Dmitry Tursunov of Russia, 6-4, 7-6 (7/4).

Briton Murray, winner at the Thailand Open last weekend, joined Nadal as he showed far too much in brushing aside American Alex Bogomolov Jr, 6-1, 6-2.

Murray takes on David Nalbandian of Argentina, who defeated Ivan Dodig of Croatia 7-6 (7/2), 6-2.

Earlier in the day, the 2007 champion Ferrer came from behind to beat Ebden 4-6, 6-2, 6-2 to set up a quarter-final meeting against Radek Stepanek of the Czech Republic.

"Always when I play him (Stepanek) it has been close matches because he is a very good player. He serves and volleys unbelievably. I need to play very consistent to return very well to win tomorrow," Ferrer said.