Syria: No Message Was Conveyed between Assad, Davutoglu 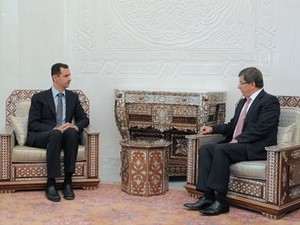 An official source at the Syrian Foreign Ministry denied on Thursday media reports that a meeting was recently held between President Bashar Assad and Turkish Foreign Minister, Ahmet Davutoglu, labeling them as untrue, reported the state news agency SANA.

The source said that the last meeting between the two officials took place in August, adding “no messages were conveyed from or to anyone during the meeting.”

The fabricated and misleading reports by some media outlets, “which reflect the hugeness and fierceness of the aggressive campaign launched against Syria, will not succeed in affecting the rightness and wisdom of the Syrian stances,” it stressed.

It was reported on Wednesday, that Assad had warned that he would “set fire" to the Middle East if foreign forces launched a military strike on his country and would ask for Hizbullah’s help to attack Israel.

An Arab source told Iran’s Fars news Agency that Assad made the warning to Davutoglu during his visit to Damascus.

"If a crazy measure is taken against Damascus, I will need not more than six hours to transfer hundreds of rockets and missiles to the Golan Heights to fire them at Tel Aviv," Assad said.

The Arab source said that the Syrian president told the Turkish FM that he would also call on Hizbullah to launch a rocket attack on the Jewish state.

"All these events will happen in three hours, but in the second three hours, Iran will attack the U.S. warships in the Persian Gulf and the U.S. and European interests will be targeted simultaneously," he reportedly said.

Assad’s warning came after Davutoglu informed him that he would face a war similar to the NATO aggression on the Libyan regime if he continued to crack down on his people.

Iranian news agency did not indicate the date of the meeting between the two officials.

Who in his right mind believes this bullcrap lol. This hallucinating dude sounds like: Saddam, Qazafe, Osama, Michele Aoun!! lol.

Neither Iran nor Hizb nasralah will committ suicide for Bashar. The US would end the Iranian Navy and airforce in "3 hours". As for Israel the "law kuntu a3lam" is still fresh in the memory. Nasrala occupied lebanon, mission accomplished, he is friends now with israel: Fayez karam got only two years in jail ya 3alam ya ho heheheheheheh