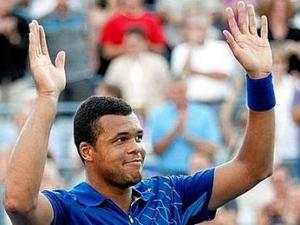 Top seed Jo-Wilfried Tsonga showed no mercy on Thursday, putting out home hope Zhang Ze 6-3, 6-4 to ease into the quarter-finals of the China Open.

The Frenchman, who won his sixth career title last month in Metz, will next face former world number one Juan Carlos Ferrero of Spain, who beat compatriot Marcel Granollers 6-4, 6-4.

"What can I say? On paper, I was better than him, but on the court it's all the time different," Tsonga said.

"It was not easy today, and I'm happy to win, even if I was supposed to."

Ferrero, who has slipped to 84th in the rankings said Tsonga would be difficult to beat.

"It will be tough for me because hard court is his favorite surface. His serve is big, forehand is big -- he's always difficult to beat," he said.

In the women's draw, second seed Victoria Azarenka was forced to pull out with a foot injury, handing Russian 13th seed Anastasia Pavlyuchenkova a walkover into the quarter-finals.

"It's disappointing to have to withdraw. I'd been hoping that my foot would be OK, but it has been bothering me since Tokyo," said Azarenka.

"I'm not sure about the recovery time yet, but I'll continue to consult with my doctor. I expect to be back for Luxembourg (from October 17)."

Agnieszka Radwanska, the 11th seed, stepped up her bid for a second straight Asian trophy after winning in Tokyo last week, putting out Swede Sofia Arvidsson 6-4, 6-2.

Radwanska, winner of two titles this season, remains in the hunt for a year-end finals place at the WTA Championships in Istanbul.

But the Pole admitted burnout at this stage of the season remained a danger.

"It's always tough, especially now in the end of the year. Everybody's pretty tired, and some of us are still fighting for the championships. Everybody wants to play everything, we're playing a lot," she said.

"The season is ten months, which is really long. It's hard to be in shape."

In the next round she faces former world number one Ana Ivanovic, the French Open winner three years ago.

Meanwhile, Romanian Monica Niculescu, who knocked out China's French Open winner Li Na in the first round, came back from a set down to beat France's Virginie Razzano 4-6, 6-1, 6-2.