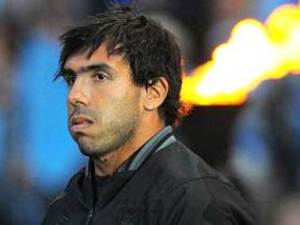 The Tvoi Den daily said Anzhi felt Tevez was there for the taking after his dramatic spat with City manager Roberto Mancini resulted in a two-week suspension for the Argentine star.

"The conditions for signing Tevez are very good," a source on the daily told the newspaper.

The Caspian Sea side have become one of the sport's most brazen poachers of pricey talent since being acquired by the Russian oil and metals magnate Suleiman Kerimov this year.

The reported talks with Manchester City come just a month after Anzhi snatched Cameroon international Eto'o from Inter Milan in what was believed to have been a 21-million-euro ($27.9-million) deal.

The former lower division side have also been boosted by the additions of Brazil's 1994 World Cup winner Roberto Carlos and Russian international left winger Yuri Zhirkov.

Yet Anzhi have still slipped to eighth after a strong start to the season and are currently looking for another striker who can improve their dire tally of 29 goals from 26 matches.