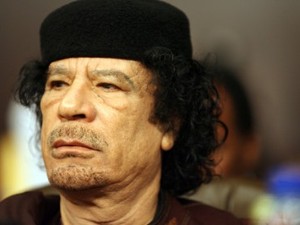 Deposed strongman Moammar Gadhafi called on Libyans to turn out in their millions to demonstrate against the country's new rulers, in an audio message broadcast Thursday on Syria-based Arrai television.

"I call on the Libyan people, men and women, to go out into the squares and the streets and in all the cities in their millions" to reject the National Transitional Council, he said in the poor quality broadcast.

"I say to them, do not fear anyone. You are the people, you belong to this land," said Gadhafi, whose whereabouts are unknown but is widely thought to still be in Libya.

"Make your voice heard against NATO's collaborators," he said, in reference to the new regime of the National Transitional Council.

"Some people speak of the NTC as the legitimate representative of the Libyan people," he said, using a term applied by many of the various foreign governments that recognized the body after it was formed.