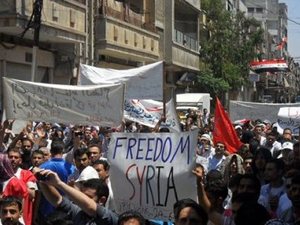 The European Union is preparing to target a Syrian commercial bank and 29 Iranians accused of human rights violations in fresh sanctions to be announced in the coming days, EU diplomats said Thursday.

A decision to blacklist a commercial bank is expected to be formally adopted in the coming days and come into force at the end of next week, several diplomatic sources told Agence France Presse.

An EU diplomat named the bank as the Commercial Bank of Syria, targeted by a U.S. assets freeze in August.

The 27-nation bloc last month banned the delivery to Syria's central bank of bank-notes and coins produced in the EU in a seventh round of sanctions designed to step up economic pressure on President Bashar al-Assad's regime.

The last round also included a ban on European firms making new investments in Syria's oil industry, biting further at Assad's regime after an earlier ban on imports of Syrian crude to Europe.

Europe buys 95 percent of Syria's oil exports, providing the regime with one third of its hard currency earnings.

New restrictive measures against Iran meanwhile will target 29 Iranians with an assets freeze and travel ban "to state our concern on the situation of human rights", as one senior EU diplomat put it.

The EU enforced the same measures in March against 32 Iranians.

The sanctions against Syria come on the heels of growing irritation against Russia and China in the EU and the United States, for their veto of a U.N. resolution against the Syrian regime's unrelenting crackdown on protests.

More than 2,900 people have been killed in the six months since the beginning of anti-government protests in Syria, the UN High Commissioner for Human Rights said Thursday.

U.S. Secretary of State Hillary Clinton led the criticism, saying the people of Syria "will not forget" the vetoes and accused the U.N. Security Council of having "abrogated its responsibility" by failing to push through the European draft resolution.

Following the lost vote at an angry Council meeting late on Tuesday, the British, French and German foreign ministers all said new pressure would be put on the Syrian government.

Russia defended its veto of the much-softened resolution which had been backed by nine of the 15 members. Brazil, India, Lebanon and South Africa abstained.

EU foreign ministers will discuss the situation in both Iran and Syria at talks in Luxembourg on Monday.