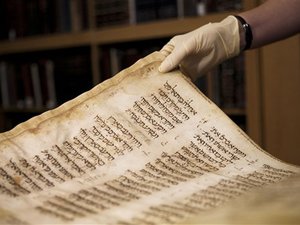 Precious Bible manuscripts originating in the Jewish community of Damascus, Syria, were on display for several hours, offering a rare glimpse at a collection that includes books spirited to Israel in clandestine operations before the ancient community disappeared at the end of the 20th century.

The books displayed Wednesday are held at Israel's national library. Because of security and conservation concerns, most of the collection went on display just once before, also for just a few hours, more than a decade ago.

The collection includes 11 volumes. Three, including the oldest and most important book in the collection, were brought out of the library's vaults and displayed during a symposium Wednesday evening.

Ranging from 700 to 1,000 years old and written in the Middle East and Europe, the parchment manuscripts include meticulous Hebrew penmanship and illustrations in ink and gold leaf. Some boast intricate micrography — decorations made up of thousands of tiny Hebrew letters.

None were written in Damascus, but rather came to be held in synagogues in the city over the centuries. They are known collectively as the Damascus Crowns, "crown" being a Hebrew term sometimes used to describe particularly important and venerable biblical manuscripts.

The Jewish community in Syria's capital had been there for more than 2,000 years before its members were driven out by government persecution and mob violence linked to the rise of Arab nationalism and the establishment of Israel in 1948. A second ancient community in the country's business center, Aleppo, met the same fate, as did others across the Arab world.

A trickle of Jewish emigrees managed to escape beginning at the time of Israel's creation, with the help of Israeli agents running smuggling routes through Lebanon and Turkey.

Most of the rest of the community left in the 1990s after Syria's late dictator, Hafez Assad, bowed to international pressure and allowed them out. Most settled in Israel and the U.S. A handful, no more than several dozen, remain in Damascus.

The oldest of the Damascus Crowns was written in the late 10th century A.D. in what is now Israel. Because it shows the influence of two rival schools of textual scholars, it has provided modern researchers with important information on how the Biblical text evolved. It was purchased by a famed British collector of manuscripts, David Solomon Sassoon, in 1914 and taken to Britain. The library purchased it in 1975.

Another of the books displayed Wednesday, a 700-year-old Bible that scholars believe was written in Italy, had a riskier journey to Jerusalem.

Beginning in the late 1970s, a Canadian Jewish woman, Judy Feld Carr, undertook an effort to smuggle Jews out of Syria, raising money from North American synagogues, bribing Syrian officials, dispatching envoys and running an independent immigration operation for more than 20 years from her living room in Toronto. All told, Feld Carr's endeavor facilitated the emigration of more than 3,000 Syrian Jews.

Feld Carr learned of the manuscript, she said, from Jews who had already fled, and dispatched a contact to Damascus in 1993. She would identify the man only as a Western Christian who died last year.

Feld Carr orchestrated a meeting in Damascus between her envoy and the community's rabbi, she recounted. The rabbi slipped him the book, and the man then smuggled it out of the country hidden under his raincoat in a black shopping bag. The book reached Feld Carr in Canada and came to Israel the next year.

While the book was in her possession, Feld Carr saw there were two records of purchase appended to the manuscript. One showed it had changed hands in Spain before Jews were expelled from the country in 1492, and the second recounted another sale in the Ottoman Empire, where many Jews found refuge.

"It went from Italy to Castille, to Constantinople, to Damascus, and then to Toronto — this book was the story of the Jewish people," she said.

The eight books that were not put on display at the library Wednesday arrived in Israel in the 1990s in murkier circumstances, smuggled out of Syria via the West in an operation conducted by Israel's intelligence services. Few details of that smuggling operation have been disclosed. Aviad Stollman, the library curator in charge of the collection, said the eight books were not displayed to avoid putting a spotlight on a story that remains largely classified.

In Damascus, the manuscripts were guarded in some of the 24 synagogues that existed before the community's emigration. They were taken out only on special occasions or with permission from community leaders, said Shlomo Baso, a Damascus-born rabbi.

Baso escaped to Israel in 1985, at age 33, by hiking across Syria's mountainous border with Turkey with his wife and five young children.

In the early 1990s, when the Jews fled en masse, they brought the Torah scrolls they had used for centuries. Some were dismantled into parchment segments that were then distributed among the emigrees and concealed in their luggage. When the pieces reached Israel, Baso sewed them back together and reconstituted the scrolls. Today, his synagogue in a Tel Aviv suburb houses four scrolls from Damascus, each about 300 years old.

"Every community has riches of some kind. We were rich in books," he said.