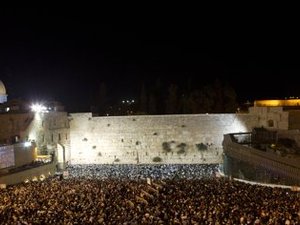 Israel limited access to Jerusalem's Al-Aqsa mosque compound on Friday for fear of violence on the Muslim weekly day of prayer, which leads directly into Yom Kippur, the holiest day in the Jewish calendar, police said.

The restrictions were part of a wider lockdown, under which the army closed all entry points from the West Bank on Thursday night.

Under the restrictions, only Muslim men over the age of 45 with Israeli residency will be permitted access to the mosque complex in the Old City, but there are no restrictions on women.

Police and border guard reinforcements have also been deployed in east Jerusalem, where the Old City is located.

The army said all crossings would remain closed until Saturday evening due to the holy day, which starts just before sundown on Friday, though exceptions could be made for people who needed medical attention.

Israel systematically closes crossing points with the West Bank on its main holidays, for fear of attacks.

The Gaza Strip, run by the Islamist Hamas movement since 2007, is shut down even more tightly.

Yom Kippur, or the Day of Atonement, focuses on forgiveness and is devoted to prayer and fasting.

During the nearly 26 hours it lasts, air traffic, public transport and radio and television programs are completely cut off.

The compound, housing the Al-Aqsa mosque and the Dome of the Rock, is the third holiest site in Islam after Mecca and Medina. It is the holiest site to Jews, as their second temple stood there until it was destroyed by the Romans in 70 AD.