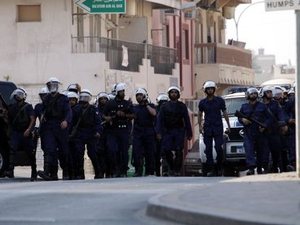 A 16-year-old Shiite protester has been shot dead by Bahraini security forces during a demonstration in western Manama, the al-Wefaq opposition group said on Friday.

Ahmed Jaber al-Qatan was hit Thursday night by bird shot used by anti-riot police in the Gulf kingdom ruled by the Sunni al-Khalifa dynasty, where the Shiite majority led pro-democracy protests that were quashed in mid-March.

"The martyrdom of young Jaber falls under the systematic oppression of those demanding democracy in Bahrain," said the largest Shiite opposition group.

On Friday, the interior ministry confirmed the death, saying the youth died of a cardiac arrest.

"Doctors were unable to resuscitate the young man and attributed the cause of death to cardiac arrest," it said, adding that the public prosecution has ordered the transfer of his body to the Salmaniya Medical Complex for an autopsy and a full investigation.

The ministry acknowledged that police fired tear gas and sound grenades at around 20 youths who had blocked the road in Abu Saiba neighborhood on Thursday evening, set fire to garbage bins and attacked security forces when they intervened.

"When police arrived on the scene, they were attacked with Molotov cocktails and rocks. Police responded with tear gas and sound grenades to disperse the crowd," it said.

Bahraini security forces quelled a month-long protest in mid-March, driving demonstrators out of Manama's Pearl Square, the focal point of protests inspired by the Arab Spring.

Authorities cracked down on Shiite villages, arrested hundreds, and scores were dismissed from their jobs.

Hundreds are being tried by a special security court, and dozens more have received lengthy jail sentence, while at least five were sentenced to death.

Despite the crackdown, Shiite protesters were soon back on the street, holding regular demonstrations in their villages, and clashing with security forces.

Authorities say 24 people; including four policemen were killed in a month of unrest.

deaply sorry for the death of this young man.
but for once, it would be decent for all not to politicize such events.
simply a young demonstrator died, may he Rest In Peace and those who pushed him to this act and those responsible for his death will sooner or later face God for this.

This is horrible and should not have happened....now Nasrallah will start proclaiming this young man's sainthood and how horrible the situation is in Bahrain...of course completely ignoring the massacre of historic proportions going on next door and committed by his Alawite allies and gangs.