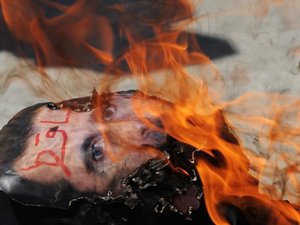 Syria will shortly present the United Nations with a list of more than 1,100 people it says have been killed by "terrorists" in ongoing unrest in the country, its deputy foreign minister said Friday.

"Syria is grappling with terrorist threats," Faysal Mekdad said in a speech to the 47-state U.N. Human Rights Council at it reviewed the situation in Syria.

"In the next few days we will give the High Commission for Human Rights a list of martyrs.....civil servants, police.....more than 1,100 people who have been killed by the terrorists," he said.

"My country has suffered numerous threats of war over the last seven months: media war, disinformation, lies of all kinds and deception."

The U.N. announced on Thursday that more than 2,900 people have been killed in Syria's crackdown on anti-regime protests since March 15.

Mekdad underlined recent reforms announced by the regime of President Bashar al-Assad, and municipal elections to be held on December 12.

"We have welcomed our humanitarian partners and the ICRC (International Committee of the Red Cross)....which proves that we have nothing to hide," he said.

He also rejected criticism contained in draft U.N. Security Council resolutions that called for an international commission of inquiry into human rights violations in the country.

The committee of experts is due to submit its report to U.N. Secretary General Ban Ki-moon at the end of November.

there is no decisive verdict concerning the bachar el assad regime in damascus yet from the international "family".
the regime is still holding the golan card, and the iraki card partially with iran,so it will be a long bloody civil war ,which will be very difficult for lebanon because iran still and i repeat still holds the shia card till now.
mazhabi civil war is a gift to the sionist entity,and the regime in syria and iran are working on it in the entire region,hassoun dont agree with this plan(remember the war between amal/hizballah),
we will see a division in hizballah very soon in parallel with intensifying civil war in syria.

Too bad the world press wasn't there to corroborate their claim. Haram for ASSad.

lol...nostradamus is nothing compared to mustapha.