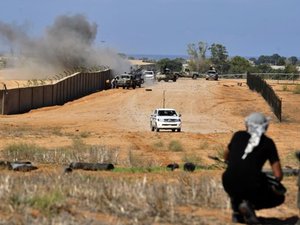 Sirte was rocked by deadly street fighting on Friday in what troops from the new regime said was the final assault on Moammar Gadhafi's besieged hometown, with orders that they take it "today."

Medics said at least four regime fighters had been killed and dozens more wounded from fighting on the west side of the city, and an Agence France Presse correspondent said ambulances continued to arrive in a steady stream at a nearby field hospital.

There were no immediate casualty figures from the eastern side of the Mediterranean city.

Earlier, medics at another field hospital, 50 kilometers west of Sirte, said 18 injured anti-Gadhafi fighters had been brought in, most of them with shrapnel wounds.

Street fighting and heavy bombardment was continuing from overnight at the Ouagadougou conference center, a major stronghold of pro-Gadhafi forces, on the western edge of the city.

Plumes of black smoke could be seen billowing up from several points in city, amid the sound of machine-gun fire and explosions.

NATO planes flew overhead, but there were no reports of air strikes.

National Transitional Council fighter Barak Abu Hajar told AFP he had been in action earlier at the Ouagadougou center and had brought out a wounded comrade.

"They're shooting from everywhere. RPGs and lots of bullets. We were told this was the final assault. Inshallah (God willing) we will take Sirte today."

Fighter Faisal Asker said, "We entered the Ouagadougou center compound but fell back because of RPG and sniper fire. There's no cover there."

"We have orders to finish the mission today."

At the field hospital, just a couple of kilometers away, the AFP reporter said ambulances with wailing sirens were arriving every couple of minutes.

A man with loud hailer, joined by others, shouted "Allahu akbar" (God is greatest) every time a patient was stretchered inside the derelict building housing the hospital.

A white minivan arrived and a crowd gathered round in prayer.

Inside there were four bodies wrapped in grey blankets, tied with white tape and a large white sticker giving their names.

Another AFP correspondent said there were particularly violent clashes around and inside the university, near the city center, and in the Mauritanian Quarter.

By midday, NTC fighters had halted the pro-Gadhafi assault and were advancing on foot among the buildings, in the face of rocket and sniper fire.

Thursday night, the Ali Nuri Sbag Brigade advanced nearly a kilometer, bringing them close to the north-south thoroughfare that forms a pro-Gadhafi stronghold, the correspondent said.

Sirte and Bani Walid, a desert town 170 kilometers southeast of of Tripoli, are Gadhafi's last major bastions against the NTC, which has ruled most of the oil-rich country since the veteran strongman was toppled in August.

As the fighting raged Thursday night, the fugitive Gadhafi called "on the Libyan people, men and women, to go out into the squares and the streets and in all the cities in their millions" to reject the NTC.

"I say to them, do not fear anyone. You are the people, you belong to this land," he said in a scratchy audio message broadcast on Syria-based Arrai television.

"Make your voice heard against NATO's collaborators," he said, in reference to the new regime.

Meanwhile, NTC reinforcements were sent Thursday to Bani Walid for another assault of Gadhafi's loyalists who are fiercely defending the oasis town.

Mussa Ali Yunes, commander of the Jado Brigade, said "we are heading for the southern front of Bani Walid," speaking of a column of 1,000 men and hundreds of vehicles.

Yunes said efforts were being made to convince the remaining 10 percent of the population still there to leave before the new assault is launched after a month-long siege.

"The offensive could, possibly, be launched in two days, but that depends" on the situation, he added, explaining that the NTC forces were outgunned.

"There are many weapons in Bani Walid, weapons of high technology, very recent, coming from Russia," he said. "We need more precise weapons but also intelligence on the inside, particularly on the number of missiles they have.

"About 2,000 fighters are deployed on the northern front, but they only have light weapons for now, because all the heavy weapons are in Sirte."

Yunes said Kadhafi son "Seif al-Islam is in Bani Walid and possibly Gadhafi as well, but there is a 50 percent doubt about that. There are many Gadhafi loyalists in Bani Walid, more than in Sirte."

On Tuesday, an NTC commander said Seif al-Islam was leading the final stand inside the besieged oasis.

Seif al-Islam, his father and Gadhafi's intelligence chief Abdullah al-Senussi are the subject of International Criminal Court war crimes arrest warrants for murder and persecution in the bloody uprising.