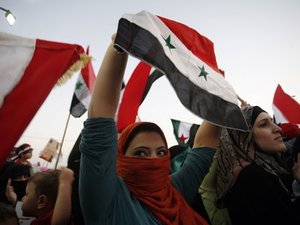 Syrians rallied in their thousands after weekly prayers on Friday, pledging support to a newly-formed opposition front and calling for an end to President Bashar Assad's regime, activists said.

Mosques across Syria, as is the case every week, again became springboards Friday for protests against the regime and also this time in support of the Syrian National Council, formed in Istanbul last weekend to represent the main currents standing against the Assad regime, activists said.

Protesters in Idlib province, where security forces massed in numbers and in the northern city of Amuda chanted slogans in support of the newly created opposition body.

Similar rallies took place in the Damascus neighborhood of Qabun, which was rocked by shootings the previous week, said the Local Coordination Committees (LCC), an activist network opposed to the regime.

Security forces and paramilitary forces locally known as the "shabiha" surrounded mosques in the suburbs of the capital, in the central city of Homs and in the Mediterranean cities of Banias and Latakia, activists said.

Analysts warn that the unrest in Syria, which began in mid-March as peaceful protests against Assad's autocratic rule, is becoming increasingly armed in response to the relentless gunning down of protesters by security forces.

An army officer who has taken refuge in Turkey, Colonel Riad al-Asaad, claims to have established an opposition armed force called the "Syrian Free Army", but its strength and numbers are unknown.

Syrian troops on Thursday pursued armed defectors near the border with Turkey, sparking clashes in which 12 people died, and crossed into Lebanon to gun down a Syrian national, activists and an official said.

Four people died in similar clashes earlier in the week between Syrian troops and deserters -- who had defected after refusing to fire on anti-regime protesters -- also near the Turkish border, rights activists said.

The Observatory and the Local Coordination Committees said soldiers and security forces backed by tanks had raided the villages in Idlib province.

The clashes with the defectors took place after troops on Thursday stormed villages west of Jabal al-Zawiya, near the Turkish border, the Syrian Observatory for Human Rights said.

Fears that the violence linked to the anti-regime revolt is spilling across the borders were heightened on Thursday when Syrian troops reportedly killed a Syrian living in a remote border area of Lebanon's eastern Bekaa region.

A government official, also speaking on condition of anonymity, confirmed the incident and said it was unclear why Khatib was targeted or how he was killed.

The United Nations said it now estimated the crackdown had killed more than 2,900 people since mid-March but warned that the figure could rise to take into account those reported missing.

The surge of violence comes as the European Union prepared fresh sanctions against Assad's regime following the failure of a U.N. resolution calling for "targeted measures" if he pursued his brutal clampdown on dissent.

Diplomats in Brussels said the EU was preparing to target a Syrian commercial bank and 29 Iranians accused of human rights violations in fresh sanctions to be announced in the coming days.

May God help them

This reporting is a farce at best.

Also Naharnet has independently confirmed that Naharnet is the most-read Lebanese news website.

I don't understand how this passes for reporting. For everywhere that these "activists" reported protests, Syrian TV went to the scene and showed how there was nothing in reality.

@ Murad: I guess people like you will never understand this kind of reporting! You are used to Al Manar and IRNA (Iran News Agency). The thousands killed and butchered by Assad are all illusions and false reporting, simply coz Syrian TV went there and found nothing. Get a life Mr. Ashraf Al Nass.....

murad, it is so easy for the syrian tv to show nothing...but reality is different even if it doesn t please you...
syrian tv is fabricating lots of false evidence... like all totalitarian regime official tv!
staline did the same, hitler did the same, nothing new there! just revise your history!

Murad if you watch and believe Syrian state TV you are, sorry to say, an idiot.

Oh nooo take it easy on my guys :(

Haha what a joke. You guys are willing to accept that random youtube videos of dead people is proof that Syrian government is killing civilians, but when Syrian TV goes to the specific towns and neighborhoods where "mass protests" are reported and there is nothing, that's called "fabricated false evidence"?