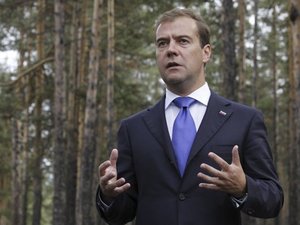 Eight Syrians were shot dead on Friday as thousands of people rallied against the regime of President Bashar Assad and in support of a newly formed opposition front, activists said.

The fresh surge of violence came as Russian President Dmitry Medvedev said Assad will have to give up power if he fails to implement reforms acceptable to the opposition, and the Syrian regime again blamed "terrorists" for the unrest.

"Four people were killed in the neighborhood of Sabaa" in the central city of Homs, the Syrian Observatory for Human Rights reported.

Two elderly men were among the dead in Homs, where security forces opened fire at thousands of protesters streaming out of mosques after traditional Friday prayers, wounding at least 25 people, the Britain-based Observatory added.

Three other people died from gunshot wounds in the protest hub of Douma near Damascus, where "snipers" shot at civilians, it said.

Mosques across Syria, as is the case every week, again became springboards on Friday for protests against the regime and also this time in support of the Syrian National Council, formed in Istanbul last weekend to represent the main currents standing against the Assad regime, activists said.

Security forces and paramilitary forces locally known as the "shabiha" surrounded mosques in the suburbs of the capital, in Homs and in the Mediterranean cities of Banias and Latakia, activists said.

The deputy foreign minister of Syria, which has yet to comment on the formation of the SNC, said in Geneva Friday more than 1,100 people have been killed by "terrorists" in the revolt that has shaken the country since March.

"Syria is grappling with terrorist threats," Faisal Mokdad said in a speech to the 47-state U.N. Human Rights Council in Geneva as it reviewed the situation in Syria.

"In the next few days we will give the High Commissioner for Human Rights a list of martyrs... civil servants, police... more than 1,100 people who have been killed by the terrorists," he said.

"If the Syrian leadership is unable to undertake these reforms, it will have to go. But this is something that has to be decided not by NATO or individual European countries but by the people and leadership of Syria," ITAR-TASS quoted Medvedev as saying.

In using its veto on Tuesday, Russia said it feared the resolution could be used for military action against Syria.

Russia, China and others still accuse NATO of abusing U.N. resolutions on Libya to launch air strikes this year.

The United Nations said it now estimated the crackdown had killed more than 2,900 people since mid-March but cautioned that the figure could rise to take into account those reported missing.

Analysts warn that the unrest in Syria, which began in mid-March as peaceful protests against Assad's autocratic rule, is becoming increasingly armed in response to the relentless gunning down of protesters by security forces.

An army officer who has taken refuge in Turkey, Colonel Riad al-Asaad, claims to have established an opposition armed force called the "Syrian Free Army," but its strength and numbers are unknown.

Syrian troops on Thursday pursued armed defectors near the border with Turkey, sparking clashes in which 12 people died, and crossed into Lebanon to gun down a Syrian national, activists and an official said.

Four people died in similar clashes earlier in the week between Syrian troops and deserters -- who had defected after refusing to fire on anti-regime protesters -- also near the Turkish border, rights activists said.

Fears that the violence linked to the anti-regime revolt is spilling across the borders were heightened on Thursday when Syrian troops killed a Syrian living in a remote border area of Lebanon's eastern Bekaa region, a Lebanese security official said.

A Lebanese government official, also speaking on condition of anonymity, confirmed the incident and said it was unclear why the man was targeted or how he was killed.

The surge of violence comes as the European Union prepared fresh sanctions against Assad's regime following the failure of a U.N. resolution calling for "targeted measures."

Diplomats in Brussels said the EU was preparing to target a Syrian commercial bank and 29 Iranians accused of human rights violations in fresh sanctions to be announced in the coming days.

Is this guy bipolar?

Too little too late!! Had the Russians been sincere (I doubt that) about wanting an end to the suffering of the Syrian people and the rebuilding of a naton from the "Scratch" state the criminal corrupt regime has left it in after fourty years of bloody murderous corrupt existence, they wouldn't have instinctively and brainlessly used their veto to protect the Genocidal Regime of Assad. The blood of the Innocent Syrian people will be on Medvedev's and his Chinese counterpart's hands. This BS talk by the Russians is nothing but an insurance policy they hope to get for when the inevitable happens and the Assads are lead to the gallows, that they would maintain their status as the prime supplier of weapons and dictatorship ideology and people supression and mafia like intelligence against the people tactics, while maintaing the Russian base in Tartus and maintaining their corrupt monopolistic privelages over the Syrian oil prospecting and drilling rights.

killings of opponents is the reform assad is implementing!

someone translate me titus mumbling

@ habal kamel
what he is saying in simple words: after the veto, this comment has not much meaning. :)

mr medyedev, or putin, the naval bases in tartous and latakieh will be closed, just remember babrak karmal. or u prefer chechnia?

Although i am a strong opponent of the Syrian regime i can understand where Medvedev is coming from. If we look at the recent history of foreign military intervention in our region (Iraq, Afghanistan, Libya) they all ended up not delivering the initial expectation. So why not try another strategy, have the regime's allies put pressure and see where this leads us. I know that some people might argue that in the mean time people are being murdered, but look at the number of lost lives in the countries where military intervention was used... to be honest it's sad to say less innocent lives are being lost now.

Could Medvedev put a time frame for reform? Could Russia forget about filling the trade gaps that the West leaves and act like a nation that belongs to human kind?
Associating with dictators is no longer beneficial for anyone, when will the leaders of russia learn?

This hypocrite and his handler Puttin are a couple of hypocrites who want to go back in time and act bring back their dead and buried Soviet Union where they had some influence in this region. They can't even control most territories in their own zip code and already launched wars against former Soviet republics who now breathe free... Go get a life punk!!!!