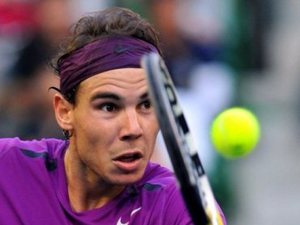 Defending champion Rafael Nadal fought off a spirited challenge from Colombia's Santiago Giraldo to reach the semi-finals of the Japan Open on Friday.

The former world number one, playing his first ATP tournament since losing in the U.S. Open final last month, struggled to break Giraldo's serve in the first set and needed a tie-break to set him up for a 7-6 (8/6), 6-3 win.

The 25-year-old Spaniard missed a couple of break points in the ninth game as Giraldo forced the first set into a tie-breaker which Nadal eventually won.

Giraldo fell two games behind in the second set taking only one point, but rallied in the third to break the Spaniard's serve and make it 1-2.

Nadal took the following game, knocking the Colombian's resolve as he marched to a 6-3 second set win.

"For me the mistake was in the third game of the second set at 30-0. That was the moment. After a very tough first set, I had a chance to play more relaxed, more aggressive, but I lost that game," said Nadal.

"He (Giraldo) is a very aggressive player. He can hit a winner from every place," said Nadal, adding that his forehand would have to improve in the semi-finals.

On Saturday Nadal will take on American number one Mardy Fish after the fourth seed defeated Bernard Tomic of Australia 6-7 (5/7), 6-4, 6-1.

"I just had to hang in there and fight as hard as I could and try to take advantage of any opportunity," said Fish, ranked eighth in the world.

Looking forward to his meeting with Nadal, Fish said it is "always a pleasure" to play the Spaniard.

"He is one of my good friends out here. Hopefully it will be fun."