STL Amends Rules of Procedure Pertaining to Excusal of Judges 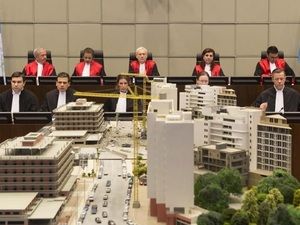 The judges of the U.N.-backed Special Tribunal for Lebanon have approved at a plenary meeting amendments to the tribunal's Rules of Procedure and Evidence, the court said in a statement on Monday.

“The amendments are designed to improve and streamline the Tribunal’s procedures,” the statement said.

“Specifically, they address the excusal and disqualification of Judges (Rule 25) and harmonizing the Rules with the Tribunal’s Host State Agreement (Rules 78 (C) & 103),” the STL added.

In accordance with Rule 5 (H), the amendments will enter into force seven days after their issuance today.

upon the grounds specified in paragraph (A),” the Rule stipulates.

It also says that “if the President is the Judge the subject of the application, the most senior uninvolved Judge, according to Rule 30 (B), shall assume the President’s responsibility under this Rule.”

The STL is probing the 2005 assassination of ex-PM Rafik Hariri in a massive bombing that also killed 21 other people and wounded nearly 300.

The court is now trying five Hizbullah members in absentia over their alleged involvement in the murder.

Nice maquette! A bit expensive considering it's the only tangible thing that came out of the hundreds of millions that this circus cost us, but still, would look nice in hariri's mansion in riyadh.