U.S. Calls on Assad 'to Step Down Now' 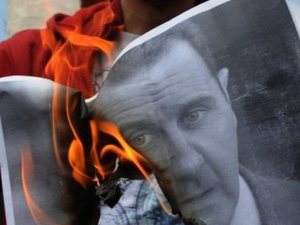 The White House on Friday called on Syrian President Bashar Assad to "step down now," warning he was taking his country down a "very dangerous path."

In a statement, spokesman Jay Carney condemned the killing of Kurdish opposition leader Meshaal Tamo as well as the beating of a prominent Syrian activist, saying it showed "again that the Assad regime's promises for dialogue and reform are hollow."

"The United States strongly rejects violence directed against peaceful oppositionists wherever it occurs, and stands in solidarity with the courageous people of Syria who deserve their universal rights," Carney said.

"Today's attacks demonstrate the Syrian regime's latest attempts to shut down peaceful opposition inside Syria. President Assad must step down now before taking his country further down this very dangerous path."

Tamo, 53, a member of the newly formed Syrian National Council (SNC) opposition grouping, was killed when four masked gunmen stormed his house in Qamishli in the north and opened fire.

His son and another fellow activist in the Kurdish Future Party were wounded, activists said. Kurds are a minority ethnic group in Syria.

Former MP Riad Seif, meanwhile, was also attacked and beaten in the street.

The U.S. State Department earlier charged that the Assad regime was escalating its tactics against the opposition with bold, daylight attacks on its leaders.

In the past months, she said: "We've obviously had a number of opposition folks arrested. We have had reports of torture, beatings, etc, but not on the streets in broad daylight.

The tactic is "clearly designed to intimidate others," Nuland said.

Nuland meanwhile welcomed reported remarks from Russian President Dmitry Medvedev who told Assad on Friday to either reform or resign.

"That is very positive," she said, adding that she had not seen the statement.

"But as we have said, we want to see more countries join us not only in increasing the political and rhetorical pressure on the regime, but also tightening the economic noose," Nuland said.

"And there are more steps that can be taken by countries like Russia to up the pressure on Assad," she said.

Medvedev said three days after Russia and China sparked global outrage by jointly vetoing a U.N. resolution on Syria that he wanted to see an end to the brutal crackdown on protesters as much as Europe and the United States.

But he quickly reasserted Russia's earlier position by saying that the best the West could do was support talks and not meddle.

I'd rather Assad fall down now

This shows one more time why the USA stands for the United States of Affkoles, if you know what I mean. Pathetic and dumb bullies who themselves are heading straight towards a sad future, like a man with two empty heads.

The only reason the West has not bombed Syria is because syria is an ally to israel and the usa....
syria never tried to liberate golan or go to war with israel in exchange of the assad s power!!

usa are waiting to see if the opposition can be reliable and credible to replace assad or not. that is why they haven t done anythg yet!

syria has always used lebanon to do the dirty work so that syria doesn t have to suffer the consequences of war!
the day the M8 supporters will realize that they are being used as puppets to serve as dogs to syria and iran maybe peace will come back here!
but they are so well brainwashed that they believe they are resistants! what a farce...