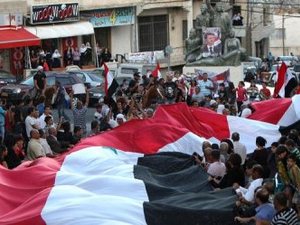 Some 500 Druze living on the Israeli-annexed Golan Heights on Friday held a rally of support for embattled Syrian President Bashar Assad, an AFP photographer said.

Waving Syrian flags and portraits of Assad, the demonstrators marched through Majdal Shams. "We love you, Bashar ... We are with the Syrian army," they chanted.

Against the backdrop of the deadly anti-regime protests in Syria, their banners read: "We are for a dialogue aimed at national unity."

Israel, whose police did not intervene in the demonstration, seized the Golan from Syria in the 1967 Middle East war and annexed the Druze-inhabited territory.

Around 18,000 Druze live in the Golan, most of who refuse to take up Israeli nationality.

Syria insists on Israel's return of the territory as the price for any peace deal with the Jewish state.