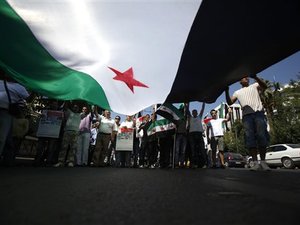 "We are ready to meet them at the foreign ministry. This could happen on October 11 if they manage to arrive in time," deputy foreign minister Mikhail Bogdanov told the ITAR-TASS news agency.

Russia on Tuesday sparked outrage from the Western powers on Tuesday when, along with China, it used its right of veto against a Western-backed U.N. resolution condemning Bashar al-Assad's use of deadly force.

The delegation, which will meet Russian diplomats on an unofficial basis, will consist of "five or six representatives of various opposition parties," Bogdanov said, speaking on the sidelines of a forum in Rhodes, Greece.

"We are ready to listen to the arguments of the opposition of the Damascus regime and on the other hand to lay out our assessments and forecasts directly without middlemen."

Russia first announced the forthcoming visit on Wednesday, without giving an exact date.

A second delegation from the opposition Syrian National Council formed in Istanbul was expected to visit this month, Bogdanov confirmed the earlier announcement, without giving a date.

Moscow has already hosted several Syrian opposition members while achieving few concrete results, with the latest delegation in September including the head of National Organization for Human Rights in Syria Ammar Qurabi.

Russian President Dmitry Medvedev on Friday called on Assad either to reform or resign, saying he wanted to see an end to the brutal crackdown on protesters, but reaffirmed Russia's stance against foreign intervention.