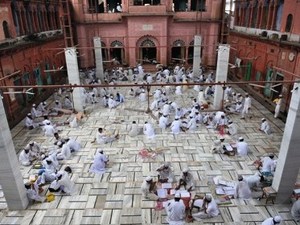 "Are women allowed to do a full body wax?" Just an everyday question for the "fatwa" desk at Darululoom Deoband, a famed cradle of conservative Islamic thought in north India.

Hundreds of queries seeking guidance on every aspect of social and religious life are posted to the school each week and dutifully noted in a green leather-bound register by Habibur Rahman, a 21-year-old student.

The answers issued in response are a far cry from the common western perception of fatwas -- largely restricted to the 1989 death sentence passed on British writer Salman Rushdie for his novel "The Satanic Verses".

But they are important.

"In the theological universe, our fatwas are equivalent to a verdict by a full constitutional bench of any top court in any country," said Rahman, who spends much of his time translating queries in English or Hindi into Arabic and Urdu.

Founded 150 years ago in the city of the same name, Deoband has trained thousands of imams who have spread its conservative brand of Deobandi Islam across South Asia and beyond to Europe and North America.

As a result, its rulings carry enormous weight with many Sunni communities across the world, and in 2008 the seminary garnered global attention with a fatwa denouncing terrorism as a sin against Islam.

But most of the work of the school's fatwa department is taken up with smaller matters that range from marital troubles and clothing etiquette to property disputes and business ethics.

Every question is evaluated by three scholars and many of the answers are posted on the school's website, which has a sizable subject search index.

Clerics at Deoband stress that their fatwas are issued as guiding principles of religious behavior and should not be coercively enforced.

"We do not intend to dictate," said the school's press spokesman, Adeel Siddiqui. "We just suggest and provide solutions and request people to follow our guidelines."

But critics say such explanations are, at best, disingenuous and hide a repressive mindset, especially when it comes to women's issues.

Previous fatwas have sought to prevent women from wearing jeans or speaking to male colleagues in the workplace.

"These religious scholars sit in a small room, far away from the grim realities of life and choose to dictate women," said Saziya Sheikh, a Muslim teacher in a government school in Deoband.

In January this year, the school appointed a reformist rector, Maulana Gulam Mohammed Vastanvi, who said he wanted to bring more transparency to a process that had prompted the Indian media to dub Deoband a "fatwa factory".

"Fatwas are misrepresented. They are a solution based on Sharia law to an individual's query and cannot be generalized," Vastanvi told The Times of India.

"We need to work on relations between the school and the media which will clear the air on fatwas," he added.

But Vastanvi's modernizing agenda fell foul of powerful ideologues on the Deoband board and he was forced out of his post after only six months.

So for now, Rahman works much as his predecessors have for the past 150 years, translating and transcribing queries from around the world and passing them along for consideration.

And the fatwa on the body waxing question?

"Yes, a woman can wax all the body and can take help from other women as well, but the other woman should not touch her from below navel to knees," was the response posted on the website.