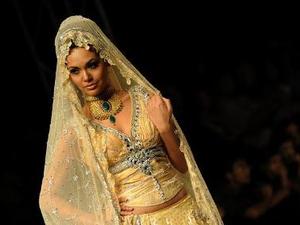 French luxury brand Hermes has launched a limited edition Indian sari range as it seeks to "connect" with Indian culture and the country's elegant traditions, it said Saturday.

Indian women may wear Western dress during the day but for weddings and other formal occasions they often prefer to wear six-yard (five and a half meter) saris, reflecting the strong pull of tradition.

"This is part of our effort to connect to India's culture and to the tradition of elegance of Indian women," Bertrand Michaud, president of Hermes India, told AFP.

"We have put all our skills into making them to pay homage to the Indian tradition."

Michaud said the sale of the 28 saris was an effort by the Paris-based company "to associate itself with the country".

"It is not a marketing tool, we won't make a fortune with them," he said.

This is the second time Hermes has offered a line of limited edition saris. Their first batch was released for their millennium collection in 2000.

The company said there are no plans yet to make the new collection permanent.