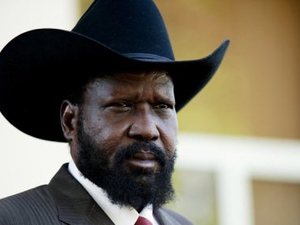 South Sudanese President Salva Kiir arrived in Khartoum on Saturday for his first visit since southern secession to discuss key unresolved issues, including Abyei and oil, that have undermined north-south relations.

Sudanese President Omar al-Bashir received his counterpart at the airport, alongside senior members of his cabinet, according to an AFP correspondent.

Kiir is accompanied by South Sudan's minister of cabinet affairs, Deng Alor, as well as the oil, finance and foreign ministers.

South Sudan proclaimed formal independence from the north on July 9, after more than two decades of devastating civil war, a conflict fuelled by religion, ethnicity, ideology and resources, such as oil, that the south in ruins.

Negotiations to regulate Sudan's political and economic division, both prior to and since partition, have made only limited progress.

Bashir, who attended the independence ceremony in Juba as a guest of honor, said last week that South Sudan was a "top priority" for the Khartoum government.

"We are looking forward to fully agreeing to resolve the pending issues through dialogue and without foreign mediation," he told members of his ruling National Congress Party.

Diplomats in Khartoum say they are doubtful about the likelihood of any landmark agreements, instead viewing the two-day visit as a confidence-building exercise that could lead to meaningful negotiations in the coming weeks.

Others are hopeful that a breakthrough can be made on the future status of Abyei, which was occupied by the Sudanese army in May, and on equitably dividing the country's oil industry, with most of the crude produced in the south.

But neither side has so far shown any intention of making serious compromises on either of these two highly sensitive issues since partition. Other important agreements, including on border demarcation, trade and debt, have also proved elusive.

The lack of progress has aggravated the lingering mistrust between Khartoum and Juba, occasionally triggering pointed accusations by senior officials.

Sudan's failure to withdraw its troops from the bitterly disputed Abyei border region by September 30, as agreed, prompted a senior South Sudanese official to charge that Khartoum had no intention of doing so and was purposely blocking the return of displaced southerners.

Separately, disagreement over how much Juba should pay to use the north's oil infrastructure has resulted in Khartoum blocking southern oil exports twice since July.

Further clouding the atmosphere has been the spread of violence in Sudan's border region.

Fighting in South Kordofan, where rebel militias who once fought alongside the ex-southern rebels have been battling the Sudanese army for months, spread last month to Blue Nile state, which also has strong political ties to the south.

The U.N. refugee agency (UNHCR) said on Friday that the clashes in Blue Nile had caused more than 27,500 people to flee to Ethiopia and South Sudan in the past month.

It said it had opened a new refugee camp in western Ethiopia to cope with the influx, after the other main camp in the area, at Sherkole, reached its full capacity of 8,700 people.

You rely too much on AFP.

The Drifter (Guest) over 9 years