Two Killed as 50,000 Rally at Kurdish Leader Funeral in Syria 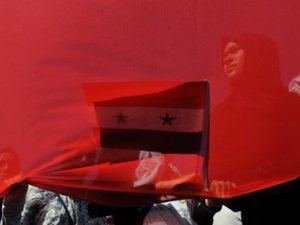 Fifty thousand Syrians rallied against the regime of President Bashar Assad on Saturday during the funeral of Meshaal Tamo, a Kurdish opposition figure slain the previous day, activists said.

"The funeral of Kurdish leader Meshaal Tamo, who was assassinated yesterday in the city of Qamishli, turned into a mass rally with more than 50,000 demonstrators calling for fall of the regime," the Syrian Observatory for Human Rights said.

Tamo, 53, was killed by four masked gunmen who stormed his house in Qamishli in the north and who also wounded his son and another fellow activist in the Kurdish Future Party, activists said.

The opposition Local Coordination Committees said Tamo "was killed on Friday at his home by unidentified men. His son as well as female activist Zahida Rashkilo were wounded."

The official SANA news agency reported "the assassination," but gave a different account of Tamo's death. It said he was killed "by gunmen in a black car who fired at his car."

Tamo founded the liberal Kurdish Future Party, which considers the Kurds to be an integral part of Syria.

He was a member of the newly formed opposition Syrian National Council (SNC) and had been released recently after spending three and a half years in prison.

Thousands of Kurds took to the streets in Qamishli on Friday after Tamo's death was made known, and gathered outside the hospital where his body was taken.

The United States said Assad's regime is escalating its tactics against the opposition with bold, daylight attacks on its leaders, while France said it was "shocked" by the news of the murder.

"This is a clear escalation of regime tactics," State Department spokeswoman Victoria Nuland told reporters, referring to reports of Tamo's murder, as well as the beating on Friday of former MP Riad Seif.

Nuland said both opposition leaders were attacked in broad daylight.

France condemned the regime's "brutal violence" in its crackdown on the opposition.

Seif, a former lawmaker, had to be given hospital treatment after being beaten outside a mosque in the capital's commercial neighborhood of Medan.

The end of Assad is getting nearer every day...

its music to my ears let the civil war begin!