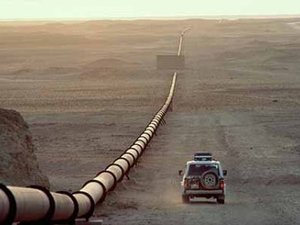 The blasts occurred overnight in the Safwan bridge area southwest of the port city of Basra, and the Qarenat area west of there, near the Rumaila oil field and caused a fire, according to a police officer and an SOC official.

"Production has stopped on the southern side (of Rumaila). ... Technical staff are working non-stop now to solve the problem."

An SOC official, speaking on condition of anonymity, earlier said the blasts and ensuing fire, which has since been put out, did not affect exports.

The Rumaila field is the country's biggest, with proven reserves of 17.7 billion barrels of oil. Britain's BP and China's CNPC have had a contract to extract crude there since 2009.

Zubair is another field in Basra province and is exploited by an ENI-led consortium, which includes Occidental Petroleum Corp of the United States and Korea Gas Corp of South Korea.

Oil sales account for the lion's share of government income in Iraq, with the country exporting around 2.2 million bpd. That figure is set to rise by around 300,000 bpd early next year, according to the oil ministry.

Iraq currently produces around 2.9 million bpd, and says it will be capable of output of 12 million by 2017.

I wonder whether another Hezb Ebola zombie was envolved in this act of sabbotage maybe the "saint" Badreddeen's cousin or something??... per the orders of the Supreme Criminal in Tehran.