Israel Police Out in Force after Muslim, Christian Tombs Defaced 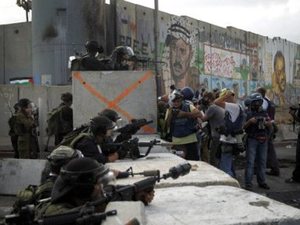 Israeli police deployed reinforcements around Muslim and Christian sites in Jaffa on Sunday after graves in the mixed port town were found to be desecrated, a police spokeswoman said.

"Police reinforcements have been deployed around the Muslim and Christian religious sites which are considered to be sensitive," spokeswoman Luba Samri said.

"The police have been ordered to prevent any provocations," she said, adding that they were in touch with Muslim and Christian officials in the Mediterranean town, which lies immediately south of Tel Aviv.

Vandals defaced graves in two cemeteries, one Muslim and the other Christian, with anti-Arab graffiti, Israeli police said on Saturday.

The vandals wrote "Death to Arabs" and "Price Tag" on 22 graves in the Muslim cemetery and on four in the Christian burial ground, media reports said.

President Shimon Peres in a statement denounced what he called "this criminal profanity which damages our honor and is contrary to the moral values of Israeli society."

He urged police and the judiciary to "redouble efforts to arrest and convict the criminals guilty of such acts."

Police term "price tag" incidents as acts of vengeance by extremist Jews against Palestinians or Arabs. The term usually refers to attacks by Jewish settlers on Palestinians or their property in the West Bank.

On Monday, an unknown number of attackers set fire to a mosque in the Bedouin town of Tuba Zangaria, 10 kilometers (six miles) north of the Sea of Galilee, causing heavy fire damage and destroying Muslim holy books.

The perpetrators also scrawled the words "tag" and "revenge" on the mosque's walls, in what police called "a very severe price tag incident."

Peres visited the scene of that attack accompanied by chief rabbis Yona Metzger and Shlomo Amar.

"I feel nothing but shame over this atrocious incident," Peres said.

Police spokeswoman Luba Smari told AFP on Saturday that an inquiry has been launched into the Jaffa incidents, adding that the "graffiti was removed" as soon as it was discovered by the authorities.

Arab councilors in Jaffa denounced the cemetery attacks as "new racist aggression," and urged people not to "react to provocation."

how come nobody comments on these issues?
How pathetic